As previously detailed by MON on 19 April (King of Spain to Preside Over Launch of ISAAC PERAL Submarine – Mönch Verlagsgesellschaft mbH (monch.com), HM King Felipe VI of Spain presided over the launch of the kingdom’s first indigenously-designed submarine – the S-81 ISAAC PERAL – at the Navantia Shipyard in Cartagena on 22 April.

Accompanied by HM the Queen, HRH Infanta Sofia and HRH the Princess of Asturias – who actually launched the boat, of which she is the royal sponsor and ‘godmother,’ in the traditional manner. The King thus marked the importance of the landmark evento for Spain, for Spanish industry and know-how and for builder Navantia.

Minister of Defence, Margarita Robles, described the event as a historic day for Spain, stating the submarine indicates the levels of “science, innovation, technology” Spanish industry has reached. “It is the future [it is a] masterpiece,” she announced. 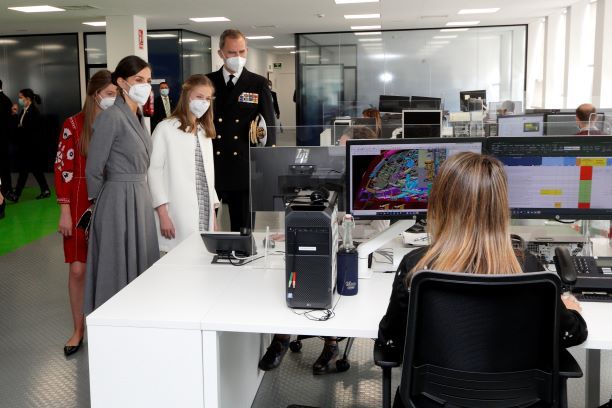 His Majesty King Felipe, the Queen, the Infanta Sofia and the Princess of Arturias, touring the Virtual Design Centre at Navantia’s Cartagena shipyard prior to the launch ceremony. (All photos: Navantia)
