The Republic of Korea’s (RoK) Ministry of National Defence (MND) has revealed plans for a new ballistic missile as part of its ambitious Defense Reform 2.0 project, elements of which will be enacted under the 2022 – 2026 mid-term defence plan announced in an MND press release on 2 September.

“We will develop a missile that can launch farther, stronger, and more precisely and exert a strong deterrent to achieve security and peace on the Korean Peninsula,” the release states. This is presumably in reference to the May 2021 termination of missile development guidelines approved by the US. The statement adds that RoK forces will continue to deploy a variety of missiles “with increased destructive power” and strengthen their ability to strike key targets.

Missile guidelines agreed by the US and RoK in 1979 limited range and payload for Korean-developed missiles. Revised several times, one 2012 change allowed for development of missiles with an 800km range and 500kg warhead – the latter stipulation being scrapped in 2017.

Since then, the HYUNMOO-4 (800km/2,000kg) has been developed and tested and it follows that the the next development will feature greater range. According to the Center for Strategic and International Studies (CSIS), the RoK has three convergent strategies designed to defend the nation and deter aggression.

Where, precisely, a new missile fits into these strategies is unclear. The overall length of the Korean peninsula does not significantly exceed 800km – though the new, longer-range missile may be submarine-launched, allowing the RoK navy to deploy more survivable assets that could be used in the event of a nuclear strike, for example. 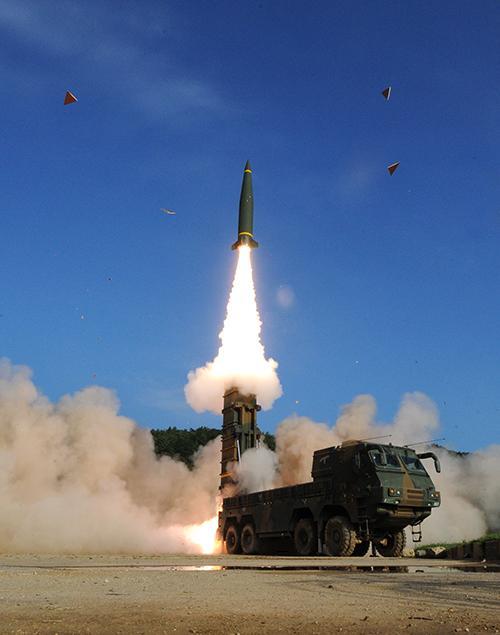 HYUNMOO-4 has already surpassed the capabilities of HYUNMOO-2 (seen here in a 2017 launch) and provided valuable experience for development of a more capable ballistic missile. (Photo: RoK MND)