Underlying Technology Could be Further Developed

South Korea’s Agency for Defence Development (ADD) announced on 12 January that it has successfully tested a locally-developed directional infrared countermeasure (DIRCM) system, designed to improve the survivability of military aircraft against portable surface-to-air missile systems. Designed to deceive a hostile missile’s IR seeker, the system was tested while mounted on helicopters.

The agency said the development is significant because the system has “drastically shortened the response time, enabling aircraft to defend against portable surface-to-air missiles from a close range”.

While the new DIRCM has been designed to counter non-imaging IR seekers used by many older missiles still in service, the technology behind the device could be further developed to provide a stepping stone for an enhanced system, capable of countering more modern missiles using an imaging IR (IIR) seeker, according to a previous statement by the Defense Acquisition Program Administration (DAPA).

Developed in co-operation with local company Hanwha Systems, the technology is expected to be installed on various military aerial platforms, including large aircraft when enhanced with a stronger laser output. 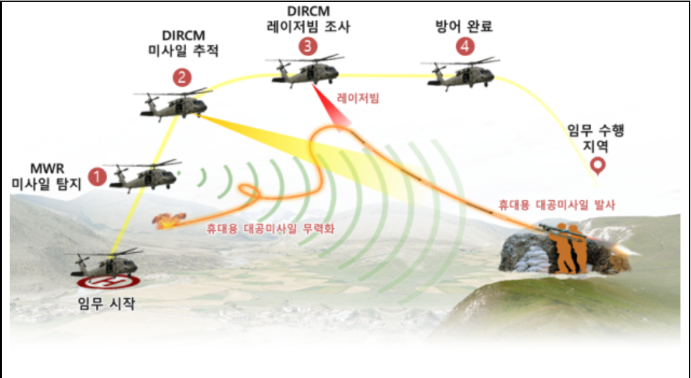 The indigenously developed DIRCM will lend itself to multiple applications. (Image: ADD)