The project, budgeted at KRW28.8 billion ($23.5 million) and slated for completion by 2027, is designed to secure technologies that enable ant- or bee-shaped microrobots to operate simultaneously in a cluster, according to a 7 March announcement by the Korea Research Institute for Defense Technology Planning and Advancement (KRIT).

The microrobots, which will also need to be equipped with the necessary surveillance and communication technologies, are meant to support military and security units in a number of missions, noted KRIT. The project, aimed at maximising the military use of microrobot swarms, will be carried out by a consortium led by LIG Nex1. Other entities taking part in the project are Seoul National University, the Electronics and Telecommunications Research Institute (ETRI), and the Korea Advanced Institute of Science and Technology (KAIST).

KRIT stated this new robot technology is also expected to find applications in civil industry sectors. Its director, Lim Young-il, said he hopes the recently-launched joint research effort between industry and academia will also help promote the advancing of technologies under the ‘Fourth Industrial Revolution’.

Meanwhile, Cho Kyu-jin, a professor at Seoul National University in charge of developing ultra-small ground robot platforms, said there are still many technical challenges to solve for military use of ultra-small insect-type reconnaissance robots , “but we will aim to improve our technology as much as possible“. 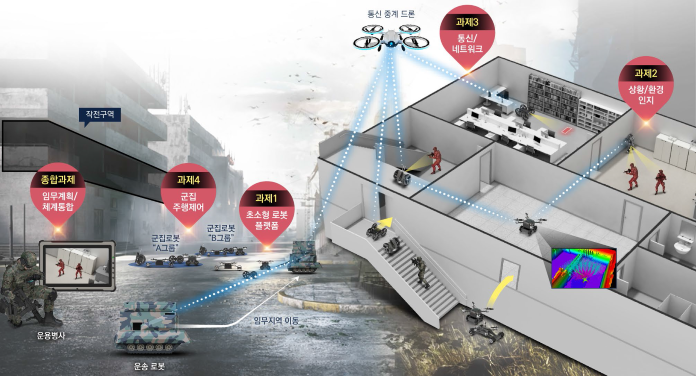 A general schematic showing elements of the concept. (KRIT)