Milrem Robotics has been demonstrating its THeMIS Combat Support unmanned ground vehicle (UGV) at the Special Operations Forces Innovation Network Seminar (SOFINS) event in France this week. The event, which ran from 29 June to 1 July at Camp Souge, near Bordeaux and home of the 13th Parachute Dragoon Regiment, provided the Estonian company with the opportunity to showcase its THeMIS UGV alongside partners Glenair and FN Herstal.

The tracked UGV was equipped with FN Herstal’s deFNder Light RWS, which features a 7.62mm machinegun. Additional cabling and connection solutions were provided by Glenair.

The demonstration is understood to have been completed in front of representatives from the French Special Operations Command (COS), which co-sponsors SOFINS alongside the French Procurement Agency (DGA). A spokesperson for the company confirmed to MilTech that the demonstration had consisted of a mobility demo and blank firing of the RWS.

THeMIS has already deployed to Mali in support of the French-led Barkhane counter-terrorism operation. According to MILREM, the UGV was deployed for 12 months and covered more than 1,200km over lava rock soil in temperatures as high as 50°C.

Also demonstrated at SOFINS was a firefighting solution which could be easily integrated on board Milrem’s Multiscope Rescue HYDRA UGV. Co-developed with foam extinguishing technology specialist InnoVfoam, the solution includes the HYDRA fire monitor and foam proportioning system.

“The firefighting robot can be remotely operated by firefighters who remain at a safe distance while receiving a complete overview of the operation area via various cameras, i.e. thermal and infrared, and sensors onboard the robot that can additionally detect gas or chemical leaks.

“The fire monitors can be operated independently from the UGV thanks to separate cameras on the UGV and the monitors allowing the vehicle to change position while maintaining a perfect overview of the fire. The system can also be complemented with additional preventive and repressive systems and autonomous functions,” a company statement confirmed.

InnoVfoam’s fire monitors have the capability to dispense 2,000-20,000 litres of water and foam in just a single minute.

Boasting a maximum payload capacity of 1,200kg, THeMIS’s Multiscope Rescue UGV has a pull force of 15,000N, which enables it to carry a variety of specialist firefighting payloads, including foam or water tanks in addition to tethered UAS, which provide firefighters with increased situation awareness.

”The Multiscope Rescue Hydra developed together with InnoVfoam can alleviate dangers firefighters face and help contain fires faster,” explained Milrem’s CEO, Kuldar Väärsi. “This is also an ideal tool for military rescue services that face the same challenges as other firefighters.” 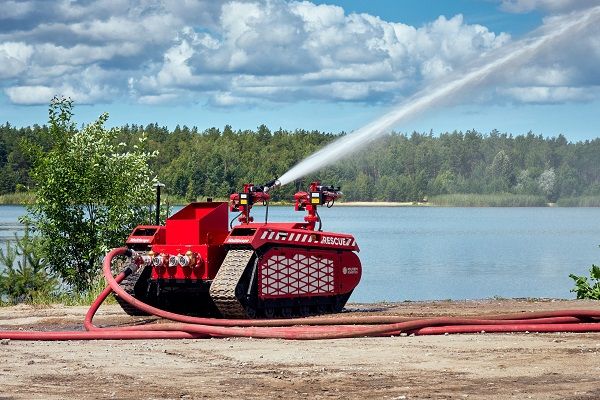