Arquus is taking the opportunity of SOFINS 2021 at Souge, near Bordeaux, to highlight the characteristics and capabilities of its HORNET range of RCWS, which was officially launched at IDEX in Abu Dhabi earlier in the year.

HORNET already equips the French Army’s new generation of armoured vehicles being introduced under the SCORPION modernisation programme – JAGUAR, GRIFFON and SERVAL. The range is particularly applicable to the requirements of special forces vehicles, a point that the company seeks to emphasise during SOFINS.

HORNET remote-controlled weapon stations are very versatile, combining an effector with latest-generation sensors, making them the tool of choice for observation, reconnaissance and intelligence, as well as also for information sharing, blue/red force tracking, target designation and indirect fire guidance. It can also be effective for search patrols or deep attack groups, complementing the traditional skills of special forces units.

In the configuration presented at SOFINS, the HORNET turret offers unique performance in very limited space, weighing only 260kg for the turret, without options – a weight that makes it potentially useful for long-range, autonomous missions with limited equipment and ammunition. HORNET turrets are also incomparably more accurate than a circular-mounted weapon, particularly in movement. The optronics are gyro-stabilised, resulting in exceptional stability and accuracy. First-round hit probability is enhanced by a sophisticated ballistic solution calculation system that takes into account various parameters such as weapon, ammunition type, range, target movement and vehicle behaviour. These various capabilities allow for the reduction of ammunition carriage where necessary, while still allowing for superior tactical effects.

Designed for conventional forces as part of the SCORPION programme, the HORNET RCWS can be easily adapted to the very specific requirements of special forces operators, addressing the essence of their modus operandi – the use of equipment in an innovative manner to achieve mission success. Building on experience from the SCORPION programme, HORNET now offers high-end RWS with the most advanced technologies and capabilities currently available: the flagship HORNET and the lighter version, HORNET Lite (which uses the same optronics) significantly enhance the capabilities of the vehicles to which they are fitted, enhancing their operational effectiveness and reliability. 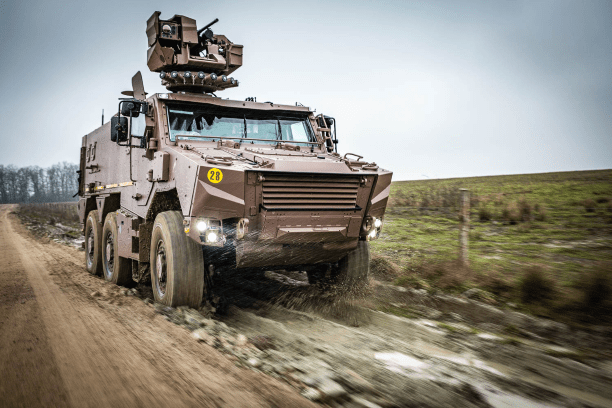