The proliferation of micro, mini and small unmanned aircraft systems is nothing new in the defense community.

However, as the capabilities of so-called “near peer” adversaries continue to advance at a rapid pace, the special operations community in particular is considering next-generation technology, tactics, techniques and procedures to maintain tactical overmatch on the battlefield — including taking some tips and tech from drone racers.

This centres around air frames and payloads that are more modular, as well as consideration of how micro, mini and small UAS are controlled on the battlefield. The community is looking at UAS that can be operated in congested, contested and confined battlespaces, including urban and subterranean environments where communication can be denied.

Also heavily investing in the concept is the US Special Operations Command (SOCOM) and Doolittle Institute’s Sofwerx organisation, which focuses on the collaboration, innovation and rapid prototyping of next-generation technologies.

Speaking to MONS after the event, Lt. Phillip Chitty, SOCOM spokesperson for Sofwerx, described how, “high-speed drone technology,” — that is, from racing drones — provided multiple technological capabilities for SOF operators.

“Drone-racing related capabilities open up the use of virtual reality, advancement of small, affordable, high speed aerial platforms and the components such as imagers and GPUs that ride on drones,” he says. “The exponential growth of the high-speed drone market is providing ample opportunity for Sofwerx to discover, evaluate and leverage relevant technology. There is the potential to use this technology for several applications, to include reconnaissance and surveillance as well as counter UAS. These drones can potentially perform advanced functions at higher speeds with greater maneuverability, and do it at a fraction of the cost that would have been required only a few years ago. Sofwerx has engaged with professional drone racers to draw from their intellectual capital as well as looked at the use of headset VR technology and methods for flying, navigating, or operating drones and payloads.”

More than 200 participants from government, industry and academia participated in a variety of demonstrations in the ThunderDrone event, with key technologies including, “autonomy and mapping for land and air to include navigation and target identification, analytics in geospatial and intelligence and ATAK [Android Tactical Assault Kit] interoperability.”

Additionally, the event considered levels of machine learning and artificial intelligence algorithms which, according to Sofwerx documentation, included, “numerous streams of live or near-real-time sensor data.”

Although such capabilities have yet to proliferate through current operations, there are elements of related technology which could soon be made available to SOF teams. Options include the Multi-Ability Reconfigurable Small UAS (MARSUAS), built by Maryland-based UAV Solutions, and which has been designed in collaboration with the U.S. Combating Terrorism Technical Support Office (CTTSO).

According to CTTSO literature, published in the organization’s 2017 Review Book, SOF tactical teams want more flexible systems. They currently are, “constrained to singular design small UAS that are not able to adapt to multiple mission roles and rapid changes to situations on the ground.

“SOF currently relies on single form factor Group 1 and 2 fixed and vertical lift Small UAS to perform current mission tasks. Units are challenged with maintaining training currency and standardization, interoperability between platforms, sustainment of the systems and an increase in operational load when deploying these different small UAS,” the review book says.

Ongoing efforts seek to provide SOF teams with a single small UAS platform which is capable of switching between a fixed wing and rotary wing/vertical takeoff and landing and tiltrotor capability in field conditions. All UAS configurations would also be operated from a single universal controller tablet.

“When fielded, SOF will have a rapidly reconfigurable small UAS that has the potential to replace all existing Group 1 Small UAS,” CTTSO documents say.

CTTSO documents describe MARSUAS as still being under development, although service officials described how a total of four air frames were due to undertake testing and delivery to force components over the first quarter of fiscal 2018.

DARPA is also looking into next-generation capabilities for small UAS. In 2016, the agency initiated the Fast Lightweight Autonomy (FLA) programme, intended to develop sensor-loaded quadcopters that could operate in cluttered environments at speeds of up to 20m per second.

Participants in the programme include AeroVironment and Scientific Systems Co., as well as Draper, MIT and the University of Pennsylvania.

“DARPA’s FLA programme aims to develop and test algorithms that could reduce the amount of processing power, communications and human intervention needed for UAS to accomplish low-level tasks, such as navigation around obstacles in a cluttered environment,” agency officials tell MONS. “If successful, FLA would reduce operator workload and stress and allow humans to focus on higher-level supervision of multiple formations of manned and unmanned platforms as part of a single system.”

DARPA has highlighted various operating concepts that could benefit from the technology, including military teams conducting urban warfare and immediate response teams relying upon UAS for surveillance of an operational area for disaster relief and rescue operations.

“To know what’s going on inside an unstable building or a threatening indoor space often requires physical entry, which can put troops or civilian response teams in danger. The FLA programme is developing a new class of algorithms aimed at enabling small UAS to quickly navigate a labyrinth of rooms, stairways and corridors or other obstacle-filled environments without a remote pilot,” according to DARPA.

Other programme requirements call for a UAS to successfully make their way through a variety of openings, including doorways and windows, as well as demonstrating uninterrupted communication when operating inside and underground where GPS signals can easily become interrupted.

“The challenge for the teams now is to advance the algorithms and onboard computational efficiency to extend the UAS’ perception range and compensate for the vehicles’ mass to make extremely tight turns and abrupt maneuvers at high speeds,” he says.

“Very lightweight UAS exist today that are agile and can fly faster than 20m per second, but they can’t carry the sensors and computation to fly autonomously in cluttered environments,” Micire says. “Large UAS exist that can fly high and fast with heavy computing payloads and sensors on board. What makes the FLA programme so challenging is finding the sweet spot of a small size, weight and power air vehicle with limited onboard computing power to perform a complex mission completely autonomously.”

Asked about the company’s participation in the DARPA programme, AeroVironment’s Steve Gitlin says the concept could also be applied to loitering munitions, including the company’s own Switchblade product. “SWITCHBLADE flies much faster than our RAVEN, WASP AE and PUMA AE reconnaissance UAS. We train military operators in SWITCHBLADE,” Gitlin says.

Speaking to MONS on condition of anonymity, SOF sources in Europe also described similar ongoing efforts to not only create specially designed airframes for rapid deployment in confined and congested areas of operation, but also in increasing the skill sets and tactics, techniques and procedures (TTPs) of operators.

One such source says designs will be unveiled later this year, although further details remain scarce due to operational security concerns.

Elsewhere, multiple armed forces around the world continue to support drone racing teams, although they so far appear unrelated to any operational utility on the battlefield. Examples include the Australian Army Drone Racing Team, which takes part in international racing events.

The Australian Army, for example, is also aiming to host the Military International Drone Racing Tournament in Sydney in 2018 where lessons learned, concepts of operation and TTPs are likely to be exchanged to advance this skill set yet further.

UAS capable of operating in similar urban environments are already relied upon in the current operating environment, with examples including Flyability’s ELIOS, which has been designed to fly in complex, cluttered or indoor spaces using a spherical shape, essentially a small drone encased in a wire ball.

On display at the Commercial UAV Show in London in November 2017, the “collision tolerant” ELIOS demonstrated its ability to protect its motors and payloads with a carbon fiber structure, allowing the UAS itself to survive collisions at speeds up to 15km/h (9.3 mph).

“This means you can access the tightest spaces without any risk of crashing,” says Juhan Mlouka, Flyability’s business development and sales manager. “There is no need to focus on avoiding obstacles, Elios bounces off and rolls on them to find its way. You can fly close or even in direct contact with humans without any risks of injuries.”

XPONENTIAL – The Spot for Innovation

If you’re looking to harness the power of unmanned technology, AUVSI XPONENTIAL 2018 is the spot. An intersection of cutting-edge innovation and real-world applications, XPONENTIAL is the one event that brings all things unmanned into sharp focus. Join more than 8,500 industry leaders and forward-thinking users from both the defense and commercial sectors to learn the latest on policy, business use cases and technology applications. For more information and to register, click here. 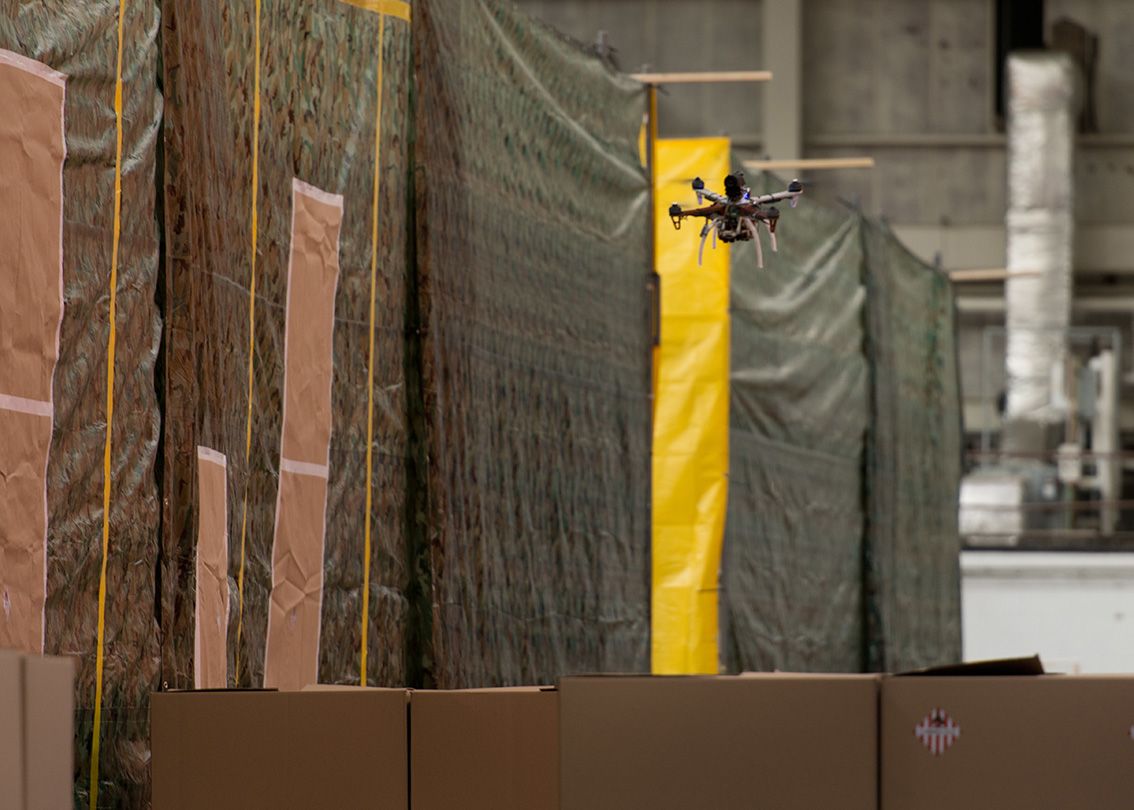