The DDG-51 Flight III class is the bridge to the Navy’s follow-on DDG(X) class. Schlise reported the first Flight III, USS Jack H Lucas, is 75% complete. The tranche will feature many enhancements, including being fitted with Raytheon’s AN/SPY-6 radar. The sea service plans to invest in a new DDG(X) class, as current vessels literally have no room for future growth – another instance (and lesson learned) of excessive SWaP [size, weight and power consumption]. Whereas earlier DDG-51s were commissioned at 8,300t, later vessels now average 10,000t – too large for adding new C5ISR and other systems needed to fight future multi-domain battles.

Investment in unmanned systems is also expanding. L3Harris remains on schedule to deliver its Medium USV prototype in 2023. Six industry teams are competing to provide Large USV conceptual design studies under a contract awarded in September 2020.

A quick-moving effort to increase missile lethality is the move to enhance the venerable Tomahawk. In November, Raytheon Missiles & Defense was contracted for low-rate production of the Maritime Strike Tomahawk Block Va, which includes navigation and communication upgrades in addition to an advanced multi-mode seeker for engaging moving targets at sea.

Odom told delegates his office continues to collaborate with industry and other stakeholders to bring the Light Amphibious Warship concept to reality. He also emphasised his staff continues to transition mine warfare capabilities from legacy platforms to modular mission packages, expected to be fitted on Independence-class LCS.

A major future advance lies in the conceptual Integrated Combat System, an anticipated large-scale investment in ship-mounted cloud computing infrastructure as the backbone of future strategy for network-centric naval warfare. ICS is not a programme of record, and is being pitched by service leaders as an opportunity to meet and defeat tomorrow’s challenges. 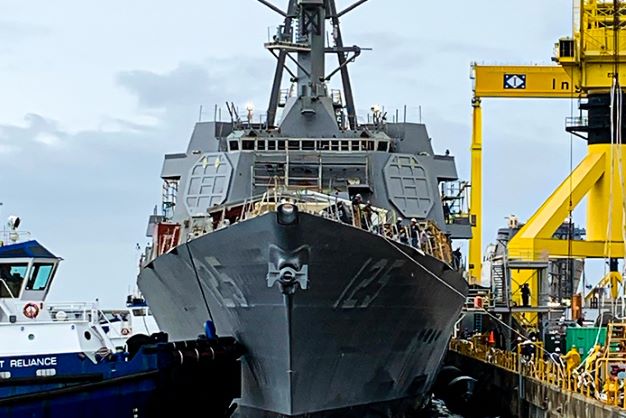