Beyond US legislative process gridlock, there are other dynamic tensions in play between the Pentagon, White House and Capitol Hill on policy issues – from support for a future fleet of undetermined size to the Navy’s roles and missions in an era of increased tensions with China and Russia. At the Surface Navy Association (SNA) symposium this week, the Honorable Mike Gallagher, Ranking Member, House Armed Services Committee (HASC), Military Personnel Subcommittee, and the Honorable Elaine Luria, Vice Chair, HASC, adroitly elevated discussion to a higher plane, offering specific recommendations to address related, festering policy, strategy, and budget matters.

Rep Gallagher began with a somewhat scathing overview of the Biden White House’s nascent efforts to draft a new National Defense Strategy. What’s new in the soon-to-be-drafted document is the ‘Integrated Deterrence’ foundation, which Gallagher has reportedly been told by Defense Secretary Austin will rely on new technologies, allies, and non-military instruments such as diplomacy. The former Marine Corps officer reflected that “platitudes” in the early staffing process provide a “false hope” for success. What is required is “more hard weapons – ships, missiles and other materiel, to make the PLA think hard,” he declared.

Significantly, both members of Congress noted the imperative to get a fleet and broader military force ready for a near-term (2025) fight with China – as well as focusing on building a future (about 2045) force. They members again found common ground on the importance of building a “larger fleet” as part of the effort to prepare for a possible near-term conflict with China. The recently-passed 2022 National Defense Authorization Act “is the worst yet,” as it reduces the Navy’s size, Luria observed.

A contentious ‘inside the Beltway’ topic is the popular, comfortable policy position of US “strategic ambiguity” with respect to Taiwan. Luria called for a decision on this decades-old policy. “It’s time to declare our position – without this we’re ‘spinning our wheels’ on defense budget and other vital decisions,” she told delegates.

Other specific initiatives offered by Gallagher in terms of China’s posturing over Taiwan include being more proactive in preparing Taiwan for a prolonged blockade and siege, by expanding the US military presence with Taiwanese forces (for instance with National Guard partnerships), as well bolstering US-flagged islands in the Pacific with logistic and other materiel and capabilities. “I could argue Phase 0 operations have started in a war with China over Taiwan,” he concluded. 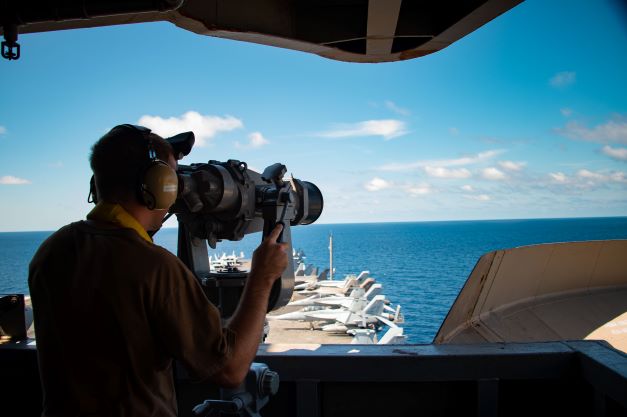 The most visible component of US power projection – the Navy – has members of Congress looking out for it. (Photo: USN/Mass Communication Specialist Seaman Larissa T Dougherty)