US Navy plans ‘simpler truck’ for its unmanned countermine mission

The US Navy (USN) still plans to hunt for maritime mines using autonomous craft but the service likely will attack the problem from a different angle, says Adm. John Richardson, the chief of naval operations.

For much of the past decade, the Navy worked off a plan to replace its aging wood-hulled mine-hunting boats mostly with a network of systems launched from the service’s new littoral combat ships (LCS), anchored by an unmanned underwater vehicle called a Remote Multi-Mission Vehicle (RMMV) that would launch from the LCS and lead the mine-finding and destroying operations, relying on the most advanced sensors and associated equipment.

The reasoning behind the shift to an unmanned system was to get the manned ships — and particularly the sailors, divers and other personnel — out of the potential minefields and let unmanned systems do the dull but dangerous work. The difficulty, though, would be to develop a sophisticated and reliable system of platforms, sensors and links that can locate where the mines are — or, just as importantly, where they are not.

The USN thought it had found such a platform in the RMMV, a 23ft-long behemoth that is 18 feet high with the mast extended, a four-foot diameter and a weight of about 14,500lbs, including the sonar.

Built by Lockheed Martin, the RMMV was once featured in a National Geographic television special on the LCS. But the USN in early 2016 halted continued low-rate initial production of the remote submarine, mostly due to reliability and related issues noted during the countermine system’s technical evaluation testing between February and August 2015.

When USN officials announced the cancellation, they said they would explore their options.

Rise of the USV

The Navy has now narrowed some of those options, CNO Richardson says. “A portion of the LCS will still do mine countermeasures,” he says. “The sensor technology has always been pretty good, especially with the ability to find mines.”

The question, then is what the Navy will use to carry those sensors. “You need a truck,” Mr. Richardson said. “We’ll probably go to a simpler truck.” He explains, “I’m thinking of an unmanned surface vehicle, relatively low-tech and affordable to acquire. It’s autonomous or semi-autonomous.”

The MCM USV is an updated model of the USV craft that is part of the Unmanned Influence Sweep System (UISS) program meant to support both minesweeping and mine-hunting operations, using a network of unmanned platforms, sensors and communications links to find and neutralise mines.

The USV design is modular and flexible, NAVSEA officials say, which allows for the sonar or sweep payload to be changed out easily. Because the MCM USV is based on the UISS craft, officials say, the additional required countermine integration with the LCS ships will be manageable and will focus on the sonar payload and associated integration.

Communications between the LCS or other host ship — as well as launch-and-recovery integration — will initially be completed for the UISS program, NAVSEA says. Following the sonar-to-USV integration, the MCM USV system will undergo system testing, command and control verification, and integration into the MCM system as the mine-hunting solution for the LCS MCM mission package.

Underwater vehicles will still have a role to play, however. The mission package includes the General Dynamics Knifefish, a heavyweight-class UUV designed to detect, avoid and identify mine threats, especially in high-clutter environments. Knifefish also gathers environmental data to provide intelligence support for other mine warfare systems, the company notes.

Captain Jon Rucker, Program Manager for the USN’s Unmanned Maritime Systems program office, said at the time, “the craft and its associated systems will provide a modular capability that will be a key component of the Navy’s future mine-countermeasures efforts.”

An early prototype sonar deploy-and-retrieve system was fit-checked onto a mockup of the MCM USV in Aug 2017, NAVSEA says, “with very successful results.”

The USN plans to complete construction of the two MCM USVs, as well as the AN/AQS-20 deploy-and-retrieve system, and conduct the initial system-level-integration and testing in 2018.

The following year, the service expects to evaluate and assess the system along with other countermine packages off LCS 2 USS Independence off the Southern California coast.

“These early fleet user operations will provide feedback for the follow-on developmental testing and Operational Assessment planned for late 2019,” NAVSEA says. “This test period will ensure that the system is ready for a full operational test.”

NAVSEA says it hopes to perform those operational tests in late 2020. Initial Operational Capability for the system is planned for 2021, NAVSEA says.

That’s not to say the USN does not practice countermine operations with unmanned vehicles now. For example, during the Foal Eagle 2015 exercises off the coast of the Korean peninsula, American and Republic of Korea (ROK) navies conducted a series successful mine countermeasures exercise.

During the exercise, US and ROK Navy ships and explosive ordnance disposal divers practiced clearing routes for shipping and conducted training surveys for clearing operational areas. In addition to ships, remotely operated vehicles were also used to rehearse mine countermeasures operations from under the sea.

“Operating in waters near the Korean peninsula provided us the most realistic training we could hope for in preparing for contingency operations,” says Lt.Cmdr. Michael Tyree, executive officer of Chief. “The geography and bathymetry can’t be replicated anywhere else and it’s good for our sonar operators, Mine Neutralization Vehicle pilots, and Mine Warfare evaluators to experience it firsthand.”

Mr. Richardson’s point about the need for a simpler truck for the advanced sensor suite is well taken. The actual identification and “neutralisation” of mines is tricky. It’s difficult and time-consuming to recognize a rectangle-shaped underwater object as a mine instead of a dumped refrigerator in a debris-littered marine environment.

However, moving those sensors into place and around the area of concern takes no technological leaps. The USN needs a vehicle that will essentially move back and forth over a certain area in an almost grid-like fashion. As Mr. Richardson says: “A lot of this is just mowing the grass.”

That is why, he says, the Navy is considering an unmanned surface vehicle instead of a more complicated undersea one. “We don’t need to be that complex. I’m not convinced we need to be submerged.”

There are additional benefits, he says. “If we reduce complexity, we make it more expeditionary. It will be able to be used by more than the LCS. Right now, it’s pretty hard-wired to the LCS. We want to liberate that.”

While the USN still plans to have certain LCS vessels dedicated for countermine operations, developing a simpler truck will open additional deployment possibilities, Mr. Richardson said. “If we can build this in a shipping container or a couple of shipping containers, and if the host platform has sufficient power and space, I can even bring allies in — we have can have more ships do the [countermine] mission. We’ve never fought alone. Allies have some capability in mine countermeasures. Our system should be interoperable to the greatest degree possible.”

The greater modularity such a system would offer also would make those forces more agile, Mr. Richardson says, an attribute he acknowledged he wants to develop to a much greater degree throughout the service. “It gives us the ability to employ capability on more things,” he said. “Right away, you multiply your options.”

The USN can do more, he says, with fewer ships. And U.S. naval forces need to focus more on that than they have had to do in decades. “We’re returning to a competitive stance with respect to sea control,” Mr. Richardson says.

That is particularly true along some coastal areas where mines are a major threat and concern — regions where the USN is focusing its forces more than ever.

XPONENTIAL – The Spot for Innovation

If you’re looking to harness the power of unmanned technology, AUVSI XPONENTIAL 2018 is the spot. An intersection of cutting-edge innovation and real-world applications, XPONENTIAL is the one event that brings all things unmanned into sharp focus. Join more than 8,500 industry leaders and forward-thinking users from both the defense and commercial sectors to learn the latest on policy, business use cases and technology applications. For more information and to register, click here. 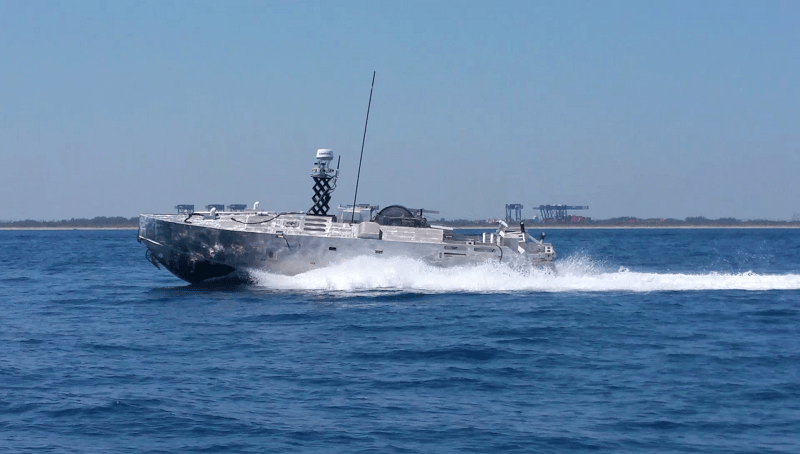