A request for information (RfI) issued by the Indian Coast Guard (ICG) on 28 February reveals an intention to procure six more OPVs for coastal and offshore patrolling and policing missions. Industry responses are required by 25 April.

The vessels are to be acquired under the MoD’s Defence Acquisition Procedure (DAP) 2020. They are to be approx. 115m in length, with a top speed of at least 23kt, cruising speed of 14kt, maximum draught of 4m and a minimum range of 6,000nmi at cruising speed, with 25% fuel reserves. With an anticipated 30+-year service life, each vessel must feature a landing deck and hangar for a 10,000kg helicopter, controllable-pitch propellers powered by twin-shaft diesels, an integrated platform management system, active fin stabilisers. two self-contained articulated cranes, and a fire control system for its main weapon. They must be able to embark two RHIBs and support VTOL UAS operations.

With a complement of 125, the OPVs are also intended for use in anti-smuggling and anti-piracy missions, as well as in SAR and surveillance operations, with added capabilities for a limited wartime role and for responding to small marine oil spills.

The RfI was issued just weeks after the handover of the fifth and final Samarth-class OPV to the ICG by Goa Shipyards Limited. The service also operates Vikram-, Sankalp-, Samar-, and Vishwast-class OPVs. 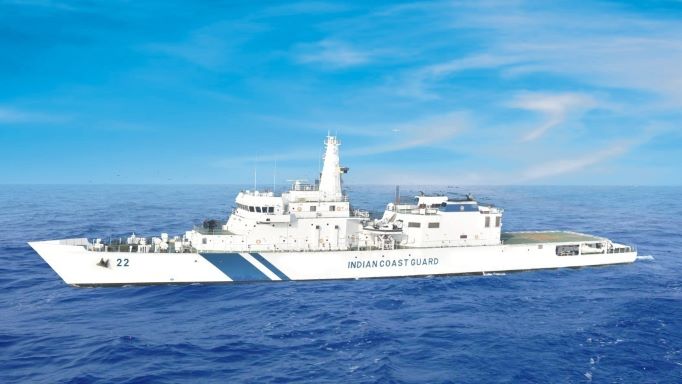 Delivery of the fifth and final Samarth-class OPV was announced in early February. (Goa Shipyards Limited)