Sinking of HELGE INGSTAD “Could Have Been Prevented”

The Norwegian Safety Investigation Authority (NSIA) has published the final part of its report on the collision between HNoMS HELGE INGSTAD and the tanker SOLA TS on 8 November 2018, which resulted in the sinking of the Norwegian Navy frigate. The first part of the report was published in November 2019.

The report makes a total of 28 safety recommendations, addressed to the Royal Norwegian Navy and the Norwegian Defence Materiel Agency (NDMA). None have been addressed to the vessel’s builder, Navantia, and NSIA concludes that the ship “could have been prevented from sinking, had she been shut down before she was evacuated.” Crucially, doors, hatches and other openings were not secured prior to the crew evacuating, which led to the vessel taking on water and sinking.

Navantia, which has collaborated closely with the Norwegian authorities throughout the process, commended the professionalism of NSIA’s thorough and exhaustive investigation in a 21 April statement. The company especially welcomes the conclusion that the flow of water through the hollow propeller shaft “was not a decisive factor in causing [the vessel] to sink” – a suggestion that had been made earlier in the process. The HELGE INGSTAD was the fourth of five frigates built by Navantia between 2006-2011 for the Royal Norwegian Navy, with which service the company continues to maintain a close and cordial relationship. Navantia sees the investigation and collaboration with NSIA as “an opportunity for constant improvement.” 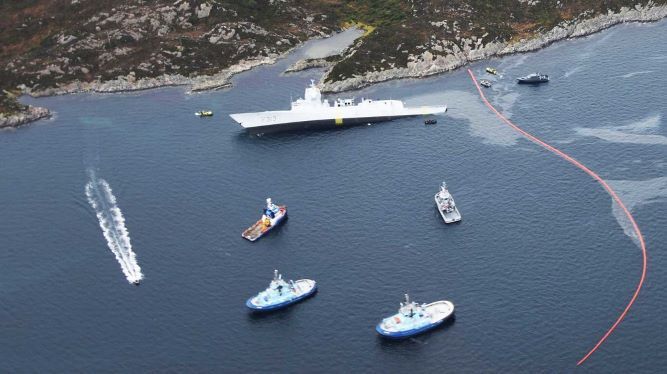 HNoMS HELGE INGSTAD after having collided with SOLA TS off Oygarden on Norway’s west coast in 2018. (Photo: Norwegian Coastal Administration)