Israels Steadicopter is showing both hybrid-powered and fully-electric variants of its multi-mission Black Eagle 50 VTOL UAV at the Singapore Airshow this week.

Speaking to Military Technology about the new hybrid version, the company’s marketing director, Or Saf, said the Black Eagle 50H not only has greater endurance (5hrs) but also a much greater payload (12kg) and higher service ceiling (16,500ft) than the combustion-engine-powered variant, which can only carry loads of up to 5kg, has an endurance of 4hrs and a service ceiling of 10,000 feet.

That said, the hybrid variant is slightly longer (3.1m) than the standard Black Eagle 50 (2.55m) and has a maximum take-off weight of 50kg compared to the 35kg of the earlier version. Both variants have a datalink range of 150km and a cruising speed of 85km/h.

“The Black Eagle 50H is the first hybrid-powered unmanned helicopter. It enables high performance and maximum operational flexibility, as it can be used for both defence/security as well as the civilian applications, including search-and-rescue and ISR operations. The type can also operate from a ship or gas and oil rigs, and hover for several hours over an area of interest,” said Saf.

To enhance mission versatility, the Black Eagle 50H enables operators to select the power source while en route, meaning that it can switch to the quieter, fully-electric mode during missions to boost survivability in contested areas.

The fully-electric Black Eagle 50E is the same size as the hybrid variant. While it has a higher service ceiling (18,000ft) and greater payload (15kg) it only has an operational endurance of 2hrs, although this is expected to increase in the future as batteries become increasingly capable. 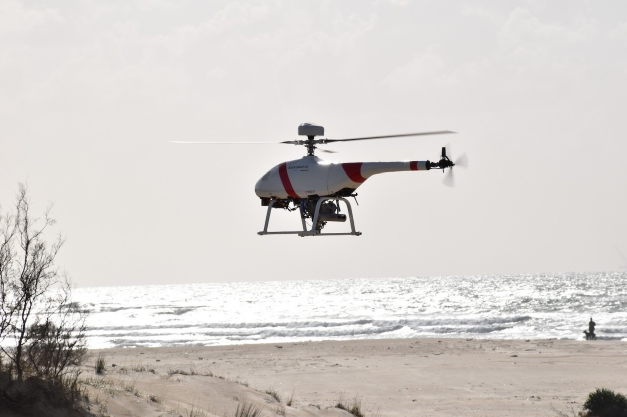 The hybrid variant of the Black Eagle 50 in flight. (Steadicopter)