Meteor, Spear and ASRAAM all in Prospect

MBDA is marketing advanced air-launched weapon capabilities to operators of the F-35 Lightning II fighter aircraft in the Asia-Pacific region.

The company displayed models of several missile systems during the Singapore Airhsow that “offer distinct technological advantages to F-35 users in the region,” according to a spokesman. These systems include the Meteor beyond-visual range air-to-air missile (BVRAAM) and the Spear stand-off all-weather weapon. “All of these systems provide a significant enhancement in terms of range, compared to similar missiles currently in service in the region. We are currently in discussion with a number of F-35 users about how to bring these capabilities to their respective F-35 fleets, especially as these weapons are being fully integrated into both the F-35A and F-35B variants,” he added.

Japan, South Korea and Australia are the three Asia-Pacific countries currently operating the F-35. Singapore has four F-35Bs on order, the first of which is slated for delivery in 2026.

Britain’s F-35Bs are armed with MBDA’s Advanced Short-Range Air-to-Air Missile (ASRAAM). Moreover, a contract was awarded in early 2021 to Lockheed Martin, BAE Systems, and MBDA for full integration of the Spear missile into RAF F-35Bs, as well as of the Meteor BVRAAM into the RAF’s and Italian Air Force’s F-35 fleets.

Meanwhile, the company confirmed it is proposing its Enforcer shoulder-launched, guided missile system for the second tranche of the Australian Army’s Lethality System Project (Land 159). Germany signed a contract for the man-portable Enforcer in December 2019 to meet a requirement for a lightweight, day/night, precision-guided weapon system with an effective range of over 1,800 metres. 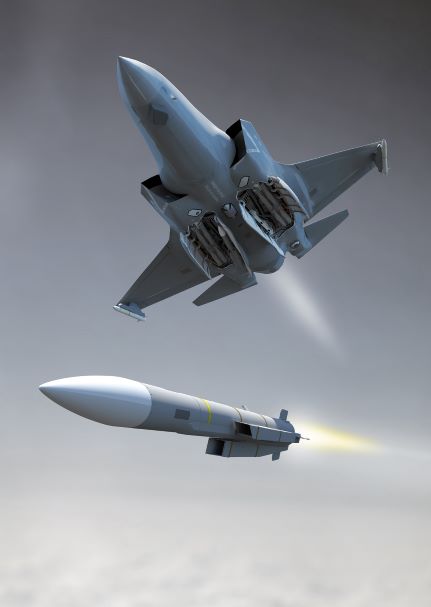 Spear launching from an F-35C. (MBDA)