The Streamlight SIDEWINDER Tactical Flashlight is without any doubt the most interesting flashlights I own, having stood up to abuse for more than a year now at 4.65×2.34in weighing 5.02 ounces. You can really tell Streamlight put a lot of thought into this very rugged design and construction.

The SIDEWINDER was designed as a replacement for the old incandescent fixed right-angle military lights, serving its function perfectly. It uses four different emitters to give the user multiple different colour/brightness output options in one light. Despite not looking ergonomically designed, the SIDEWINDER handles very well and is comfortable to use. Its adjustable angle head makes it possible to use the light in many different ways from a standard light to a MOLLE-mounted right-angle light.

The head moves a total of 180° and can be straightened to make the SIDEWINDER more like a traditional light. Near to the head joint there are alternate fixing point for the clip, allowing the user to choose which side to have the clip on, depending on how one holds it and wants to operate the switch. As supplied the clip position seems to suit right-handed users. The clip is sturdy, and made of coated steel, allowing for belt, MOLLE and with an ACH mount, helmet mounting option.

The tiling head allows the flashlight to be clipped to a pocket or MOLLE strap on a backpack, tilt the head down, and free up your hands, and the multiple illumination sources, boasting two navigation LEDs (Green/Blue), a dedicated IR LED and the main white light LED. All four LEDs are variable output and can be quickly set to your desired brightness by depressing a rubber actuator switch (hence, multiple different colour/brightness output options in one light, referring to the set of five modes that are repeated for each of the four emitters: Max, High, Medium, Low and Flashing – bright strobe – modes). All four LEDs activate at a low 5% and progressively increase through four brightness settings to 100 percent. Additionally, double tapping the rubber actuator switch, immediately, puts the selected LED into 100% bright strobe mode. Selecting the type of light output is easily accomplished by feel even when wearing gloves. The belt clip can be secured to either side of the SIDEWINDER, tilting 180 degrees.

A significant bonus is the fact that even once the white LED “runs dry,” one can get several more hours on one of the coloured LEDs, so even if one does not have a change of batteries, one won’t be left in the dark.

The recessed soft-click switch is deep enough not to activate accidentally and easy to operate. The head angle adjustment gives SIDEWINDER the ability to use it as a straight light, making it much like a standard light with a side switch. Tail-standing it and adjusting the head angle means the beam can aimed at the right angle the beam where you want it. Well designed and made, SIDEWINDER gives great flexibility with four colours to choose from, each with four regulated output levels and a strobe mode. 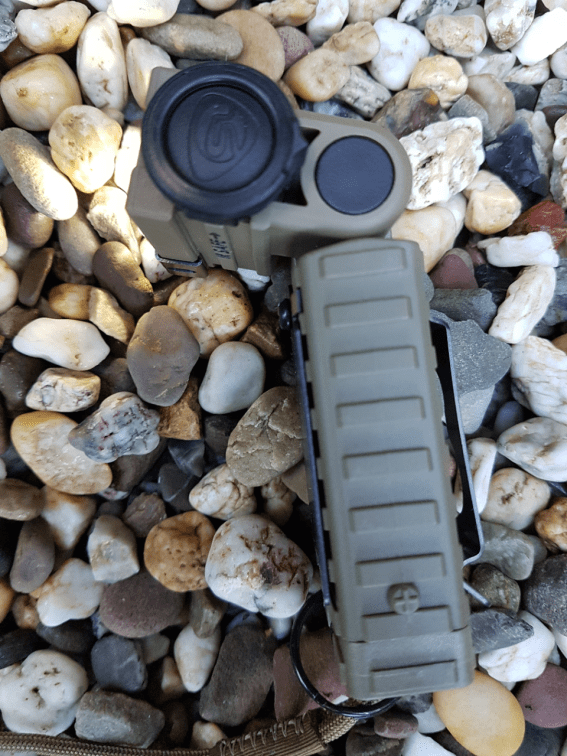