Snippets of the Biden administration’s upcoming National Defense Strategy are emerging. During several SAS fora, it was revealed that the classified, ‘advanced’ copy has been forwarded to the US Congress. In the rest of the version intended for public distribution, “campaigning forward” will be a foundation of future operations. Marine Corps Commandant, Gen David Berger, indicated his service is already moving in that direction. Indeed, he described campaigning forward as an extension of what the Marine Corps already does. “Having the Coast Guard, Navy, Marines present, and I would argue special operations as well, forward all the time, not fighting their way in but forward all the time, gives the [defense secretary] a better picture of what’s in front of him”.

While further emphasising the service’s Force Design 2030 strategy complements the new defence strategy, he also took time to note the Marine Corps will remain expeditionary as well as forward deployed, further allowing it to campaign in the future. Campaigning forward represents the “first opportunity to deter” an adversary, he said, and “you’re already in places they want to be. If they want to extend beyond the South China Sea, if you’re [China or another peer competitor], if you want to extend your defense line farther and we’re already there, it makes it much more difficult”.

He added a “Stand-In Force” approach to its list of concepts under development for future operations to deter or defeat China, which the US considers a rapidly approaching peer threat. This concept supplements the traditional forcible entry amphibious force with one already living and manoeuvring within the enemy’s operating area. These two together, a stand-in force and a rotational expeditionary force, will support campaigning forward for the sea services. 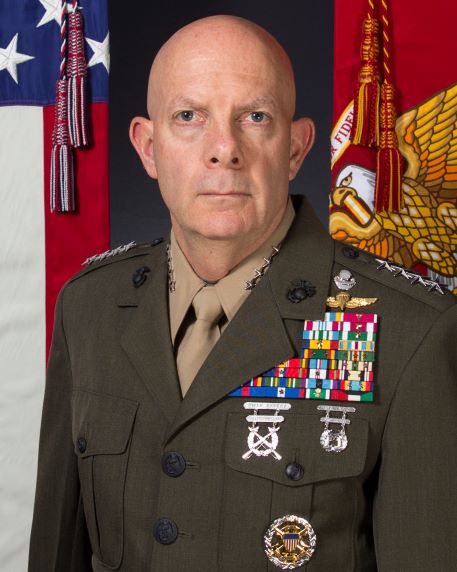 Commandant of the US Marine Corps, Gen David Berger. (USMC)