The baseline Northrop Grumman Advanced Anti-Radiation Guided Missile (AARGM) is transitioning to the Extended Range (AARGM-ER) variant, to allow the launch platform to emerge victorious in more challenging, but unspecified, Suppression/Destruction of Enemy Air Defenses (SEAD/DEAD) missions the US expects to conduct well beyond the end of this decade. To that end, AARGM domestic procurement ended in FY2021, with the programme of record set at 1,803 missiles. Final deliveries of the baseline AARGM are expected through FY24.

AARGM-ER builds upon the baseline missile’s sensor and avionics packages. The -ER variant has a new solid rocket motor, warhead and a control actuation system supplied by Marotta Controls. Capt Alex Dutko, programme manager for the Direct and Time Sensitive Strike program office (PMA-242) at NAVAIR, noted the AARGM-ER will be deployed on the F/A-18E/F and EA-18G, with the F-35 being an “objective platform”. The US government is in negotiations with international F-35 customers to sell the AARGM-ER, and Northrop Grumman is on contract to Lockheed Martin to begin integration on the F-35 in a lab setting later this summer.

AARGM-ER entered the production and deployment phase last summer. Development test #2 -was successfully completed this February. -ER variant low-rate initial production contracts for Lots 1 and 2 have been awarded for 16 live and 6 test missiles in each tranche. Operational testing will continue in FY23. Initial operational capability is planned for fourth quarter FY23. Full-rate production is expected in FY25. 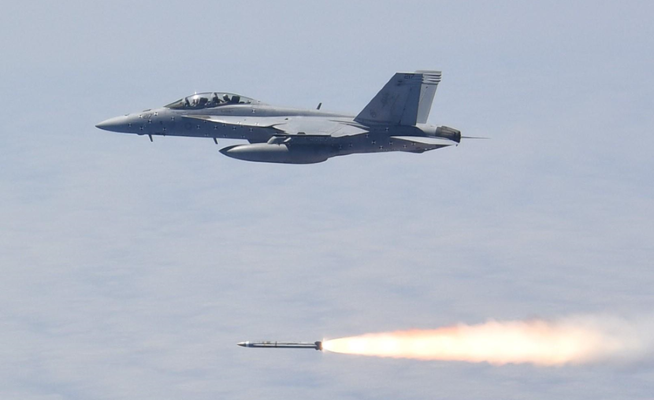