Moving Beyond Strategy with Cooperation, Presence and Technology

It’s an understatement to note the Arctic Ocean is a strategic region of growing geopolitical and global importance to nations in and well beyond that ocean’s contiguous waters. The Pentagon, and, by extension, the US Navy, are refining their strategies to allow the US to compete in the region. In January, the Navy released its strategic blueprint for engagement in the Arctic  <https://www.navy.mil/Press-Office/Press-Releases/display-pressreleases/Article/ 2463000/department-of-the-navy-releases-strategic-blueprint-for-a-blue-arctic/>. More significantly, the service is taking incremental actions to bring this strategy to fruition.

2nd Fleet Commander Vice Adm Andrew Lewis told delegates at the 2 August conference session on ‘Arctic Domain Readiness,’ that enhancing presence and cultivating partnerships in the Arctic are critical to ensuring the region does not become a contested space. “The Arctic is a cooperative area. But it will only remain a cooperative area if we continue to build those relationships — even with the Russians […] We have to work together because the environment is very, very challenging … and the environment is changing [but] if we aren’t present there, and if we aren’t continuing to build those partnerships, it will be a contested space.” Failure to maintain presence in the Arctic would “cede the space to the Russians or somebody else,” Lewis stated, adding that it could also become a space in which conflict arises.

Yet, with the priority of maintaining a presence in the Indo-Pacific area of responsibility to support the wars in Afghanistan and Iraq, the USN, until recently, has had a token, albeit increasing, presence in the Arctic region. In one instance, the HARRY S TRUMAN carrier strike group operated in the Norwegian Sea in 2018. Then, in 2020, four US and one British ship conducted maritime security operations in the Barents Sea – the first USN surface ship presence in that sea since the mid-1980s.

Beyond cooperation and on-station presence are technology challenges.

Richard Jenkins, CEO of USV developer Saildrone, observed “The demand for heavy ice breakers is going to decrease” in the not-too-distant future if the Arctic becomes “an ice-free zone.” He then asserted that “Unmanned systems are not a replacement for manned systems,” but manned-unmanned teaming could reduce the need for humans to be present 24/7 in the harsh Arctic environment. To point, he offered, on-station USVs, or aerial or undersea drones, would constitute a presence – able to notify military forces and scientific teams to changing situations. 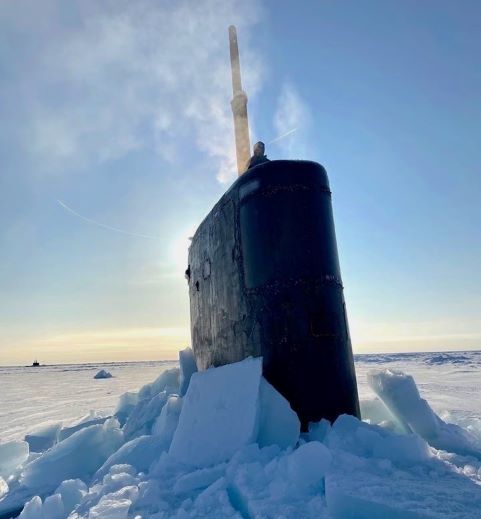 The USN is implementing an incremental approach to strengthening operational readiness for Arctic operations. (Photo: USN)