On 30 April 2020, the US Navy announced the award of the FFG 62 (CONSTELLATION-class) contract to the Fincantieri/Marinette Marine (F/MM)-led industry team for detail design and construction of up to 10 ships in the programme – the lead ship plus nine options. Capt Kevin Smith, programme manager for Project/Program Manager, Ship (PMS 515), updated SAS delegates on the way forward with the programme.

Confirming they are being built “for forward presence,” he added, “this is going to be a game changer for the US Navy. While its mission will primarily be anti-submarine warfare,” the new vessels will also be equipped to support anti-air and anti-surface warfare, as well as other missions.

F/MM was awarded the construction contract based on its FREMM design, though Smith pointed out “we’re making this [7,400t warship] a little bit longer and are widening it a bit.” Construction of the lead ship is expected to begin in Spring 2022, “and we’ll have a four-year build cycle. Somewhere in the 2026 timeframe we’ll see the first ship ‘roll off’ and join the US Navy.” This May, the service awarded F/MM the contract to build FFG 63, the second ship of the class.

The FFG 62s will not be fitted with a hull-mounted sonar, but will rather be quipped with Raytheon’s Dual-mode Array Transmitter (DART) variable-depth sonar. Other sensors of importance include Raytheon’s AN/SPY6 (V3). Significant weapon systems include 32 Mark 41 Vertical Launch System cells and a Mk110 57mm gun.

The Navy is clearly not setting itself up to go down the same acquisition path as it did with the over-cost, underperforming and much-delayed Littoral Combat Ship. Capt Smith stressed the programme will, among other strategies, emphasise “early and detailed integration testing across all areas [C4I and others] as much as we can,” and will invest heavily in providing government-furnished equipment to the F/MM-led team.

Capt Smith called attention to the Navy’s decision of this June, that Naval Station Everett, WA, will serve as the homeport for 12 FFG 62s, of the 20 ship programme of record. The first few vessels will have a single crew of 200, while the Navy assesses its crew concept. In light of the LCS’s history, it’s intriguing to note the lessons learned during that programme’s Blue/Gold rotational/forward-deployed crew concept will be used to inform the crew concept for follow-on ships. 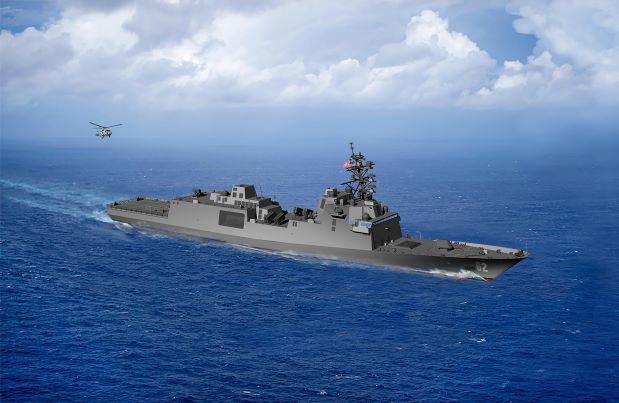 A rendering of the FFG-62 class frigate. (Image USN via GE Marine)