The US Navy is close to ending production of the Advanced Anti-Radiation Guided Missile (AAGM) with over 1,450 weapons delivered to date. The Navy-Northrop Grumman focus is now on providing the Extended Range (ER) variant for US and international operators.

The AARGM-ER is a ‘game changer’ in terms of advanced capabilities, compared to the legacy-era missile it is scheduled to replace. The ER has a diameter of 11.5iner (vs. 10in for the AARGM) and weighs 1,030lbs (vs. 795lbs for the AARGM). The new ER air vehicle has been sized for integration on the F-35 and for a larger rocket motor and propellant – allowing it to achieve about twice the tactical range and twice the speed of the legacy AARGM. Doug Larratt, Northrop Grumman’s Programme Director for AARGM, in the company’s Advanced Weapons division, also noted the increased dimensions allow for an improved warhead and increased protection for the missile’s advanced avionics package, as well as other capabilities. He confirmed the ER’s programme of record calls for achieving initial operating capability (IOC) by the end of 2023.

“While we have this new vehicle, it is also important to remember we continued to upgrade the sensors in terms of electronic warfare. You have to be able to respond to an adversary’s air defence systems – their new systems, their new waveforms, and new air defence radars. We’re continuing to upgrade via software and hardware upgrades,” he stated. The service-industry team completed its first successful AARGM-ER live fire test on 19 July. A decision from the Navy is expected in the next two weeks, allowing the programme to advance to low-rate initial production (LRIP).

Italy and Australia are current AARGM customers, with Germany and other nations listed as prospective members of the AARGM/AARGM-ER team. 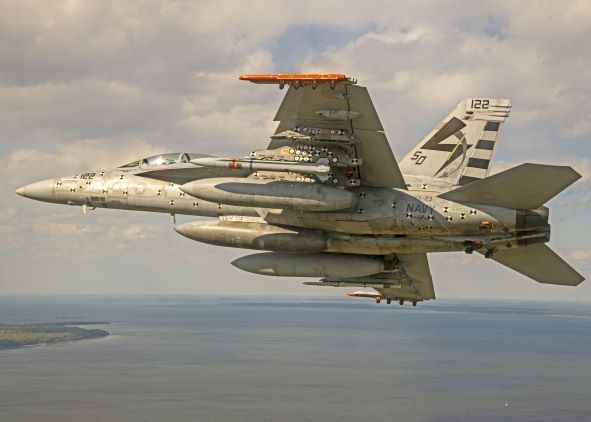 An F/A-18 with an AARGM-ER during a captive carry flight test at Patuxent River. The Navy is currently integrating AARGM-ER on the F/A-18E/F and EA-18G, and it will later be integrated to the F-35. (Photo: USN)