The latest missile warning satellite for the US Space Force (USSF) is ready for launch, having completed production almost a month ahead of schedule, Lockheed Martin announced on 4 October.

The sixth Space Based Infrared System Geosynchronous Earth Orbit (SBIRS GEO-6) satellite is now in storage, awaiting its expected launch next year. When launched, it will join the USSF constellation of missile warning satellites, featuring powerful scanning and staring IR surveillance sensors that protect the US 24/7. These sensors collect data that enables the US military to detect missile launches, support ballistic missile defence, expand technical intelligence-gathering and bolster situational awareness on the battlefield.

Like its immediate predecessor, launched in May, SBIRS GEO-6 benefits from the capabilities of the enhanced LM2100 Combat Bus, which include:

In June, SBIRS GEO-5 turned on its powerful sensors for the first time during space vehicle checkout, transmitting its first images back to Earth in a milestone known as ‘First Light.’ “[…] the performance of SBIRS GEO-5’s LM2100 Combat Bus has exceeded expectations throughout the on-orbit test campaign since its launch,” stated Tom McCormick, Lockheed Martin’s VP for Overhead Persistent Infrared Systems.

In 2015 the USAF rebaselined the contract for the two satellites, taking advantage – at no additional cost – of a Lockheed Martin internally-funded, multiyear modernisation initiative. “The LM2100 is a game-changer for military satellite design, providing satellite production efficiency, enhanced resiliency options and so much more flexibility for additional payloads and sensors,” McCormick added. “From the LM2100, we’ve really been able to enhance resiliency developing a ‘Combat Bus’ and a bridge to achieving the resilient missile warning required for the Space Force’s Next-Gen OPIR Block 0 System.” 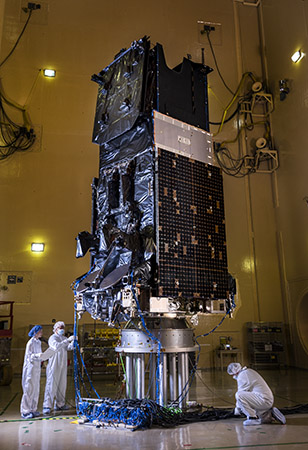