Troops from Russia’s airborne forces, the VDV, have deployed a new air-transportable, lightweight buggy – the SARMAT-2 – during the Zapad-21 exercises, according to an 11 September announcement by the Russian MoD.

SARMAT-2 is a 4×4 tactical vehicle with a maximum weight of 2,000kg, including a 600kg payload. It can transport three personnel and provides mounts for a 6P49 KORD 12.7×108mm heavy machinegun, or an AGS-17 30mm automatic grenade launcher. It is designed to be transported internally or as an underslung load using an Mi-8 helicopter.

The buggy was used in at least two different exercise scenarios. The first involved a mobile strike force of the VDV, deployed ahead of a main force using 24 Mi-8s. There, it worked with other rotary-wing assets to delay the advance of a simulated opponent. This scenario presumably represented a response to the opening phase of a conflict with a NATO coalition, during which the Russian MoD anticipates a fight against a technologically superior foe with rapid response units, before its main fighting forces can be brought to bear.

In the second scenario, it was decided to deploy an airborne assault group by helicopter, in order to limit the advance of enemy reserves. This deployment involved 32 Mi-8s as well as 14 Ka-52 ALLIGATOR and Mi-28N NIGHT HUNTER attack helicopters. Some Mi-8s were used to carry D-30 122mm howitzers as underslung loads, as well as ammunition, and others carried SARMAT-2s. This scenario represents a recurring Russian concern with the movement of reserve forces, which has received attention within Russian military thought publications.

Development of the SARMAT-2 and a range of tactics around rotary-wing assault groups may indicate that low-flying assaults by units of this type are seen as an effective way in which to disrupt NATO deployments, whilst shaping the conflict in Russia’s favour. 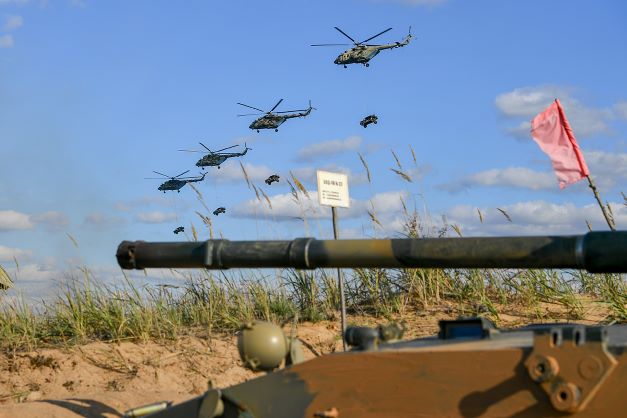