South Korean media reported on 4 January that local shipbuilder Samkang M&T has been awarded a KRW335.3 billion ($279 million) contract to build one of the six FFX III class (also known as Ulsan Batch III) guided-missile frigates planned for the Republic of Korea Navy (RoKN). Several local media outlets reported that the 129m, 3,500t vessel – featuring a top speed of 30kts – is slated for delivery in 2026. The new frigate class will replace the service’s ageing frigates and patrol corvettes, and be used to protect other fleet assets, including the navy’s future aircraft carrier, according to the reports.

The latest developments come after Hyundai Heavy Industries (HHI) announced in March 2020 that it had secured a KRW400 billion contract from South Korea’s Defense Acquisition Program Administration (DAPA) to design and build the first of the six frigates, each of which will be powered by Rolls-Royce MT30 marine gas turbines, just as the FFX-II (also known as Daegu class) frigates are.

The frigates will be able to use their electric propulsion systems during ASW operations to minimise their acoustic signatures. Accordingly, the class will rely on gas turbine propulsion when high speed operation is rwquired, said HHI.

The company also noted at the time that the new frigates, which will feature improved land-attack, ASW, and air defence capabilities compared to the Daegu class, will be equipped with a four-sided, fixed, multifunction, phased array radar – featuring GaN technology – capable of 360° coverage to simultaneously detect and track multiple threats.

HHI also stated that the first FFX-III frigate is set to be constructed at its shipyard in Ulsan and scheduled to be handed over in 2024. It is possible that the contract awarded to Samkang M&T – which has previously built vessels for the Korean Coast Guard, among other customers – is for the RoKN’s second FFX-III frigate. 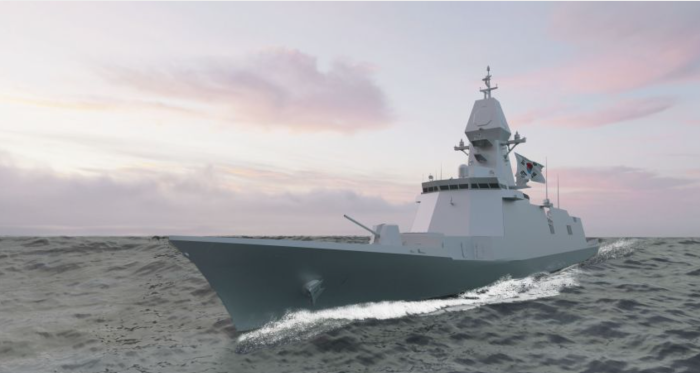 A rendering of the future Ulsan class. (Image: HHI)