On 9 November Safran, the University of Limoges and the French National Centre for Scientific Research (CNRS), with support from the French National Research Agency (ANR), inaugurated the  X-SELANS (Xlim-Safran Electronics Lab for ANtennaS) laboratory, in which they will further cement their ties and their abilities to conduct R&D on antennas and active sources, as well as the integration of microwave functions.

Work at X-SELANS will be funded by ANR and the three partners, and will involve a dozen researchers, engineers, doctoral candidates and interns. The creation of this joint lab continues the partnership between Safran and XLIM, a joint research unit established by CNRS and the University of Limoges, initiated by doctoral theses under CIFRE, a French government programme for ‘training through research,’ in 2014.

Through this initiative, Safran Data Systems plans to take a proactive role in the development of new active antenna technologies and receiving stations, in order to consolidate, over the medium term, its leadership as a producer of ground stations for space and flight testing. The research carried out at X-SELANS will address a number of challenges, including the integration of microwave components and amplifiers, the improvement of radiating component networks and the measurement and control of high-gain antennas.

“Working closely with a partner in academia, such as XLIM, will enable us to significantly speed up Safran Data Systems’ innovation and competitiveness in the ground station market,” commented Jean-Marie Bétermier, CEO of Safran Data Systems. “Developing proven skills in the miniaturisation and integration of microwave electronics in antennas, as well as digital technology, will be a critical advantage for the manufacturers involved.”

Pierre de Souffron, scientific project advisor and coordinator of the LabCom programme at ANR, added “Creating a joint lab is above all a human story. It encourages and facilitates the hiring of research engineers, doctoral candidates and post-docs. Over and above its scientific achievements, a joint lab offers the possibility of evaluating the structures involved at the end of a project to determine whether these structures should be made more permanent and how they can be used by the stakeholders. This capacity clearly reflects the benefits of the public-private partnership model.” 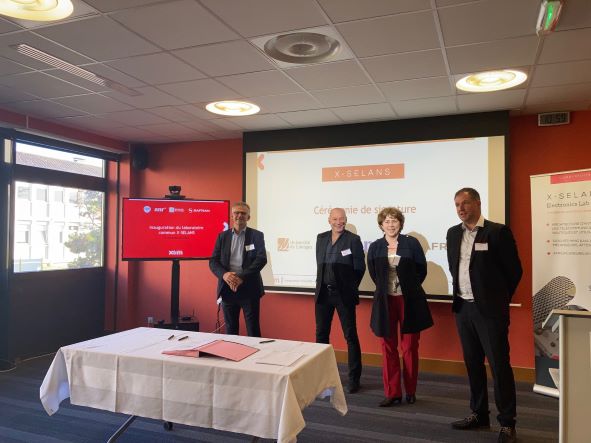 Signatories to the agreement establishing X-SELANS in Limoges on 9 November. (Photo: Safran Electronics)