Saab’s fourth AT-802F FIRE BOSS aerial firefighting aircraft has touched down at Skavsta Airport, its home base, near Nyköping in Sweden.

“For the last few months, we have been busy procuring aircraft and extending the organisation with pilots and maintenance personnel, to be able to deliver the desired capability, thus strengthening Sweden’s civil defence,” explains Ellen Molin, head of Saab’s Support and Services business area.

The AT-802F firefighter aircraft is capable of delivering up to 50,000l/hour of water. The ability to quickly reach remote sites and drop large amounts of water is crucial when assisting ground units in fighting forest fires. Based in Nyköping, the aircraft can reach southern Finland in two hours and Luleå, in Sweden’s far north, in three – but they can also be deployed to other sites, depending on the risk of fires.

“The demand for this capability will probably rise in the upcoming years and we have to be able to face that. Due to climate change, forest fires risk causing even greater damage in the future. This, combined with the fact that many countries in Northern Europe lack ‘scooping’ aircraft, meant we saw the need for two additional firefighting aircraft,” stated Petronella Norell, acting head of National Operations and Civil Protection Section at MSB. 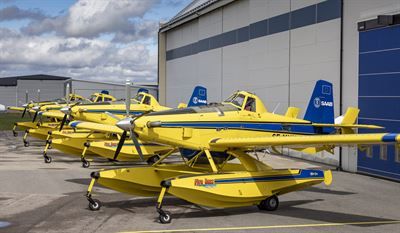