Reconnaissance units of Russia’s Military Intelligence Directorate will receive a new generation of C3 systems during 2021, the Red Star news outlet quoted Maj Gen Aleksey Belousov, Deputy Chief of the General Staff of the Ground Forces for Intelligence, as saying on 3 November.

The systems will enable the integration of “all modern technical means of reconnaissance,” including with UAS, Belousov stated, adding that the systems would enable the Russian Ground Forces to detect and destroy targets in near real-time.

The STRELETS-M manufacturer, Radioavionika, revealed some details of a modernised STRELETS in 2019. The company said the modernised version reduced system weight, and indicated it was investigating possible use of the ORAN-10 UAV as a radio repeater, and integrate other unmanned systems into its functionalities. It is understood that experience gained from Syria will have informed further development of the system. Belousov may be referring to this upgrade.

Reconnaissance units have used STRELETS-M since 2007. It provides the user with a multifunctional display and range finder. Officers are also provided with a personal tablet. The original STRELETS entered service at a weight of 5.4kg, and was provided to reconnaissance troops before wider distribution to the Ground Forces. Modifications reduced the weight of the system to 2.4kg. It can be used as part of Russia’s Reconnaissance-Fire system, designed to connect reconnaissance assets such as EW units, ORLAN-10 or GRANAT UAS, with indirect fires and reconnaissance troops. It minimises the time taken for tactical fires to be delivered on the battlefield, and can achieve a target engagement within 8-12min of a target being discovered, according to Sergey Shoigu, Russia’s Minister of Defence. 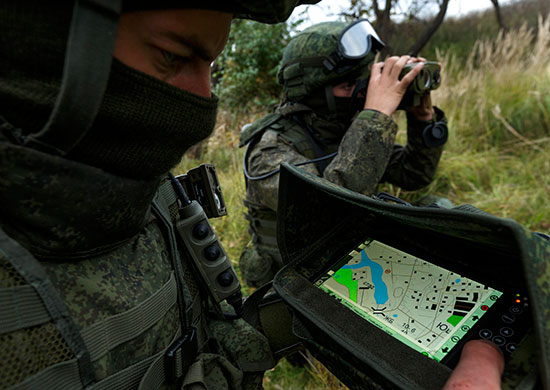 Russia’s elite reconnaissance troops are to receive a new generation of C3I system in the course of 2021. (Photo: Russian MoD)