Echoes of Use in Syria, Likely to be Expanded in Ukraine

The Russian MoD reported an air-to-ground strike carried out by an Orion (Inokhodets) strike UAV via its Twitter account on 4 March. The strike was carried out against a “command and observation post” of the 24th Separate Assault ‘Aidar’ Battalion, which can trace its origins back to one of the first volunteer defence battalions established in 2014.

The video included in the tweet shows an Orion, in the camouflage pattern believed to have been used in Syria, with a belly-mounted missile launch tube. It then shows the view from a UAV’s thermal imaging camera, viewing a series of buildings. A bright light moves across the screen and strikes a building on the ground. The angle of attack of the missile seemingly indicates the observing UAV was not the aircraft that carried out the attack.

The Orion shown is almost identical to an aircraft shown in a December MoD video in which the UAV engaged an aerial target with an air-specific variant of the 9M113 Kornet missile believed to be designated X-BPLA. The launch tube on the UAV that engaged the target in Ukraine also appears to be identical, potentially indicating the same missile was used. 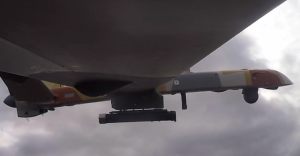 The Orion UAV shown in the video is identical to one used in a December video. (Russian MoD)

This is the first official recognition of Orion’s use in Ukraine. It is understood to have been used for strikes and reconnaissance in Syria, but this was not acknowledged until after the fact. Its deployment to Ukraine suggests a potential shift in Russian operations.

The strike capabilities deployed have included a mix of unguided air- and ground-launched munitions, as well as precision guided missiles from the Kalibr family. If Orion is used more frequently, it will offer Russian ground forces a persistent reconnaissance and strike capability that the Russian Air Force does not seem capable or willing to provide. This capability in particular, may become especially prominent as the war shifts into urban areas, as its ability to locate and rapidly engage targets will be useful to the type of siege operations that characterise urban warfare. 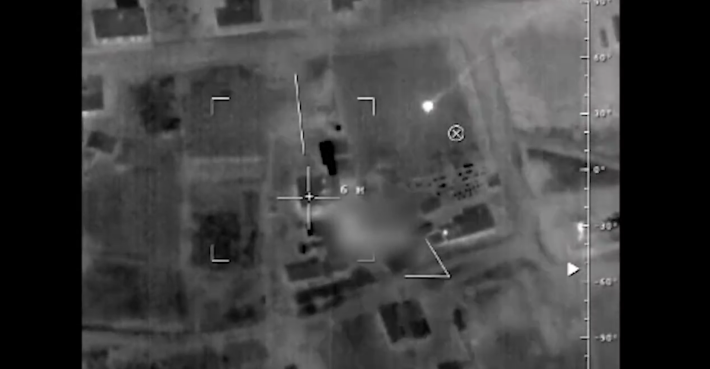 The Russian MoD has announced the use of an Orion UAV to engage a Ukrainian command post, marking its first official use for this role in Ukraine. (Russian MoD)