Russia has conducted tests of a sighting system on the Kronshtadt ORION UCAV, enabling it to accurately deploy a 100kg unguided bomb, according to an 8 September Ria Novosti article. Citing an industry source, the article claims that ORION was achieved a direct hit on a target from an altitude of 4,000m, using a new sight producing a ‘circular error probable’ of “no more than 10 metres.”

No target details were provided. The available information, including an earlier Izvestia article, indicates the probable use of a 120kg OFAB-100-120 bomb.

The SVP-24 navigation and bombing aid, designed and manufactured by Gefest & T, has been used by Russian Su-24 and Su-33s in Syria. In a 2017 Izvestia interview, the company’s director, Alexander Panin, explained the system uses onboard sensors to make calculations based on factors such as aircraft speed and  meteorological conditions to tell the pilot when to release the bomb. A similar system may have been used to test the unguided munition from the ORION.

Developing the ability to use unguided munitions is likely a priority for the Russian military. Various Russian military theorists’ interviews and articles indicate an awareness of the weaknesses resulting from reliance on guided munitions, production of which creates a bottleneck, which can severely impact combat capacity. The cost of guided munitions is also prohibitive – likely a weakness for Russian forces facing Western industrial capabilities. Effectively deploying cheap, mass-produced, unguided munitions with high precision is therefore a logical approach to achieve sufficient lethality to win a conflict. 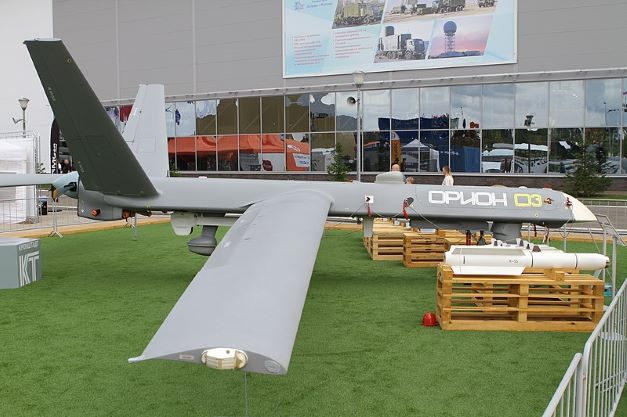 Russia appears to have tested a sight on the Kronshtadt ORION UCAV, enabling the use of conventional, unguided bombs with high accuracy. (Photo: Nickel Nitride via Wikimedia Commons)