The Rubin Design Bureau, Russia’s largest marine engineering company, is now offering foreign customers a concept vessel combining the benefits of a submarine with those of a surface patrol vessel, the company announced on 12 April.

Dubbed the Border and Offshore Submersible Sentry (BOSS), the vessel appears to be intended exclusively for export. The concept revolves around exploiting the relatively inexpensive nature of offshore patrol vessels (OPV) – as regards both acquisition and operational costs – equipment for which comes primarily from surface platforms (and aircraft) and is largely commercially available. Such vessels lend themselves easily to multiple roles, ranging from patrol and logistic support to search and rescue missions.

Providing such a vessel with the ability to dive brings two parallel advantages: discreet observation of illegal activities (and the possibility of catching perpetrators in flagrante); and evasion of intemperate weather without the need to abort the mission. A submersible ship can be used in the same manner as a traditional submarine, for ISR tasking, for example. The seabed search capability is greater than that of a surface vessel, and the submersible could also provide cost-effective training and diving experience for submarine crews for nations operating constrained budgets.

In outline and architecture, BOSS resembles the Project 613 WHISKEY-class submarine – the most numerous of the many submarines to emerge from the former Soviet Union, and one that proved extremely popular with export customers. Displacing approx. 1,000t, the 60-70m long vessel will carry a crew of 42 – including boarding personnel. Pressure-proof containers will provide housing for RHIBs or a UAS of up to three hours’ endurance, which can be launched automatically without crew presence required on deck. Optional weapon fits include torpedoes, small guided missiles and automatic cannon. 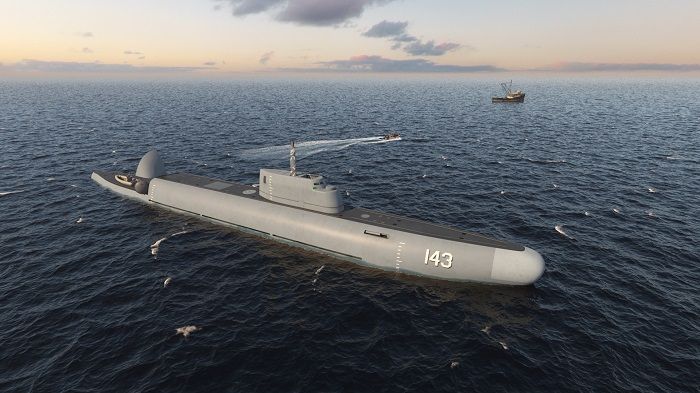