Is the Creation of 20 Additional Units in Six Months Realistic?

On 31 May, Russian Defence Minister Sergey Shoygu presided over a meeting of the Russian MoD Collegium addressing issues ranging from preparations for the Navy parade to the Russo-Belarusian ‘Zapad 2021’ exercise scheduled for September.

The major announcement, however, was of the intention to establish some 20 new military units – together with some 2,000 pieces of military equipment – in the Western Military District (WMD) by the end of the year. Shoygu unsurprisingly tied the move to the general Russian narrative of accusing the West of degrading the regional security climate, declaring that the “actions of our Western colleagues are destroying the security system in the world and forcing us to take adequate countermeasures.” After the Russian annexation of Crimea in 2014 and the war in the Donbas, relations between Russia and the West are at their lowest point since the breakup of the USSR. This has been followed by mutual distrust and excessive militarisation of Russia’s Western and Southern Military Districts.

However, is the establishment of 20 new military units in the WMD within six months a realistic ambition? Some experts believe Russia lacks sufficient resources to set up 20 new fully-staffed military units in such a short period, given that the need to find personnel, build infrastructure and supply those units with the necessary equipment.

Even though Shoygu’s announcement cannot be perceived as a bluff, we have to bear in mind, that those units will not, most likely, be staffed at 100%. His statement should be viewed more in line with the long-term vision of confrontation with the West. On the other hand, such announcement should also be considered in the context of the approaching Biden-Putin meeting, scheduled for 16 June.

The ‘kadridovannye chasti’ – the so-called ‘cadre’ or ‘lower-readiness’ units – are those that more or less fully staffed where officers are concerned, but with a low level of manning in respect of soldiers in peacetime. They are intended to be swiftly brought up to full wartime strength through rapid mobilization during times of escalating tensions. The Russian Federation inherited this structure after the collapse of the Soviet Union in 1991, and the military reforms announced in 2008 focused part of their activity on resolving the issue. It is worth noting that, at that time (2008), only 13% of units were considered to meet the highest readiness criterion – ‘permanently ready.’ 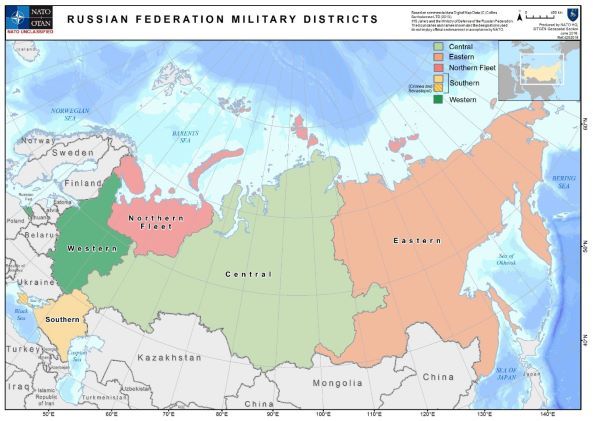 A map showing the Military Districts of the Russian Federation. (Image: NATO)