Russia’s MoD has awarded Uralvagonzavod (UVZ – manufacturer of the T-72) a contract for prototypes of the SHTURM unmanned tank during the Army 2021 exhibition outside Moscow.

This latest development in the project was reported by the TASS news agency on 24 August, following an MoD press briefing. Ria Novosti reported in May that prototype production had already begun, citing unidentified military/industrial sources.

First discussed publicly in 2018, the project’s origins – or impetus at least – likely lie in the experience gained by Russian forces in the Syrian Civil War. The goal, as repeatedly stated by the Russian press, is to create a complex of interconnected assault tanks that can be used in urban warfare, or as part of a combined arms unit.

Ria Novosti states, again citing unidentified sources, that the complex will consist of five vehicles based on UVZ’s T-72B3. Four will have a combat role, including one with a shortened (4m-long) 125mm L32 main armament, designed to be easily traversed in the close confines of urban terrain. This is, presumably, something of a challenge for the 6m-long L48 2A46-series guns that typically arm the T-72 family. While the shortened barrel will reduce muzzle velocity, this is unlikely to be an issue in the type of fighting that dominates urban warfare.

An engineer once told MON – with regard to Russian military equipment –  “you have to admire the Russians: nothing is efficient, but everything works.” If true, it is likely that Project SHTURM will result in unmanned tanks that lack the finesse of western unmanned vehicles. However, it is also likely that Russian designers will learn from this experience, and build lessons around the automation and piloting of large armoured vehicles into future research. It is not currently clear that the same can be said of any NATO nation. 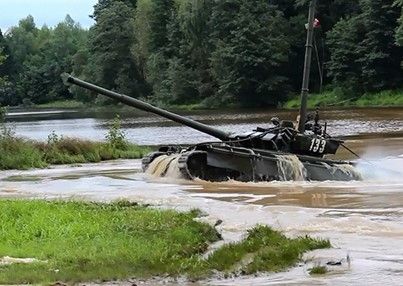 The Russian MoD is developing a family of unmanned assault tanks based on the T-72B3. A contract award at Army 2021 signals official approval. (Photo: Russian MoD)