Irritated, perhaps, by being continually photographed by reconnaissance satellites – principally those operated by the US and Israel – Iran is now seeking to obtain a similar capacity for itself; and both China and Russia are vying to generate appropriate budgets.

Some weeks ago there were media reports that Russia has agreed to deliver an advanced ‘spy satellite’ that would massively enhance Tehran’s capacity for surveillance. Some of the reports indicated that Moscow is preparing to transfer a KANOPUS-V satellite, which Israeli sources characterize as having relatively low-resolution capabilities, used by Russia for civil defence and natural disaster management. “This type of satellite will not be of real use to Iran’s military,” a very senior source stated.

While the validity of this information is somewhat in doubt, what is certain is that Tehran is using Chinese technology to develop more advanced launchers and satellites. Thus it is likely that, should it eventually receive a Russian low-resolution solution, this will fill an interim need until the launch of a high-resolution payload based on Chinese assistance. Meanwhile, China leverages Iran’s needs in order to sink its hooks further into the nation’s most sensitive issues, “for commercial reasons but, as […] always with China , this is also a way of getting a tighter grasp of this strategically-located country, the top enemy of America,” an Israeli source explained.

Iran’s space programme has long been tied closely to the nation’s special relations with both China and Russia. In April 2020, when the Islamic Revolutionary Guard Corps launched Iran’s first military reconnaissance satellite, it indicated the existence of a military space programme. The satellite was launched on a QASED three-stage rocket, using technology more advanced than in any previous test.

Tehran is also working on development of an advanced satellite launcher, designated IRIS – a derivation of the SHIHAB 3 ballistic missile. Indications are that Iran plans to accelerate its space programme as soon as the current regime of economic sanctions is lifted. 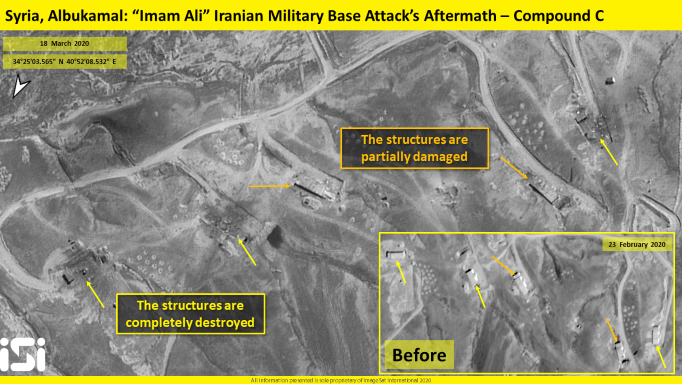 The image, taken from an EROS satellite operated by Israeli company ISI, shows the aftermath of one of hundreds of Israeli attacks on targets in Syria associated with Iranian assistance to Hezbollah – in this case, an attack that followed intelligence on the arrival of a shipment of rocket components or systems. (Image: ISI via author)