This abridged article (for full article, please see MT #2/2017 available at Singapore Airshow 2018, or order here) looks at why the Republic of Singapore Air Force (RSAF) is one of the best equipped air forces in the world.

Since gaining independence from the UK in 1965, Singapore has developed into one of south-east Asia’s most vibrant nations. The small island state with no strategic depth, relies on top-notch air capabilities to protect its interests and borders. It comes as no surprise that it boasts one of the most sophisticated air arms not just in the region, but the world.

Forging close ties with Israel and the USA has helped to sharpen its operational prowess, to easily outshine those of its neighbours. As it prepares to celebrate its 50th anniversary, the RSAF continues to evolve at an impressive rate. This huge responsibility currently falls to Maj.Gen. Mervyn Tan Wei Ming, who has been the Chief of the RSAF since March 2016. An experienced Fokker 50 pilot, he once commanded 121 Sqn operating Fokker 50MPAs in the maritime patrol and coastal surveillance role.

There are six main commands which govern the day-to-day activities of a force boasting around 13,500 personnel and 225 aircraft and helicopters, as well as around 60 UAVs. The RSAF run a very highly integrated multi-layered air defence system, which has the aircraft, Ground Based Air Defence Systems (GBADS) and radar systems all working together.

In a major restructure announced in January 2007, the RSAF started to divide itself into Commands. The first was the Air Defence and Operations Command (ADOC), formed to safeguard Singapore’s air space. Air Combat Command was inaugurated in August 2008, responsible for the fighter and transport groups. At the same time the Air Power Generation Command (APGC) was raised to supervise the operational readiness of all the main air bases– Changi, Payar Lebar, Sembawang, Tengah and Murai Camp.

The RSAF has an extremely capable fighter force, made up of 60 Lockheed Martin F-16C/D Block 52s and 40 Boeing F-15SG Strike EAGLEs. The F-16s were delivered through four successive FMS deals known as Peace Carvin I-IV.

Peace Carvin I covered four F-16A and four F-16B Block 15 OCUs, the survivors of which were later delivered to Thailand. Peace Carvins II-IV covers 60 Block 52 and 52+ F-16C/Ds delivered from April 1998 through to 2004. Several of them are based at Luke AFB, AZ/USA for initial F-16 training (see later). The remaining F-16s are split between 140 ‘Osprey’ Sqn, 143 ‘Phoenix’ Sqn at Tengah, while all the big-spined Peace Carvin IV F-16Ds are operated by 145 ‘Hornet’ Sqn at Changi. Being dual-seaters, the latter fulfil a F-16DJ SEAD role. With the first F-16C/Ds now 20 years old the RSAF has contracted Lockheed Martin to upgrade all 60 aircraft to the F-16V version. The key improvement is the AN/APG-83 AESA radar, which will allow more capable precision-guided weapons including the Laser – Joint Direct Attack Munition (JDAM) and new AIM-9X air to air weapons. The contract, worth U$914 million, was announced by Lockheed Martin on 1 December 2015 with work expected to be completed by 30 June 2023. Singapore Technologies Aerospace (ST Aero) is thought to be carrying out the upgrade work in phases, but Lockheed Martin and the RSAF remain tight-lipped about the detail.

Longer term, the RSAF is studying the acquisition of the F-35, having joined the Joint Strike Fighter’s System Design and Development (SDD) phase in February 2003, as a security co-operation partner. There are said to be plans to acquire the F-35 in the early 2020s.

Helicopters Under a public partnership agreement, five EC120 COLIBRIs joined 124 Sqn in 2007. The helicopters are owned and supported by ST Aero to train helicopter pilots. In contrast with the EC120 and its glass cockpit, are 18 Airbus Helicopters AS332M1 Super PUMAs and 14 AS532UL COUGARs in service since 1985 and 1994 respectively, used for medium airlift and SAR tasking. A mix of the two operate with 125 Sqn at Sembawang, while 126 Sqn at Oakey Army Aviation Centre, Australia operates most of the AS532ULs. An announcement in November 2016 that an unknown number of Airbus H225Ms had been purchased is likely to lead to the retirement of the Super PUMAs.

For all its modern fire power, the RSAF continues to soldier on with ten elderly C-130 HERCULES which fly with 122 Sqn at Paya Lebar. A batch of four 1959/60-built ex-USAF C-130Bs were acquired in 1977/78 and upgraded to the KC-130B tanker configuration during 1988. There are also four C-130Hs, which entered service in 1980 and two KC-130Hs that have been in service since July 1987. The latter includes a former C-130H which was upgraded to the tanker version by ST Aero. The company has also been responsible for putting the HERCULES through an extensive modernisation process, which include a glass cockpit, to bring all ten to the same common standard.

The KC-135Rs will eventually be replaced by six A330MRTTs ordered in early 2014, with the first deliveries expected next summer. These will be among the first to be built to the green aircraft configuration, with its Power-8 computers and new displays/green computers in the aviation pack. Intelligence, Surveillance and Reconnaissance Capabilities

Like most credible air forces, the RSAF has grown its ISR capabilities to combat terrorism, external threats and issues on the high seas. The UAV Command at Murai Camp operates two different UAVs, Elbit Systems’ HERMES 450 and Israel Aerospace Industries’ (IAI) HERON 1, which fly with 119 Squadron and 128 Squadron. The latter, declared fully operational in mid-March 2017, has replaced the older IAI SEARCHER. 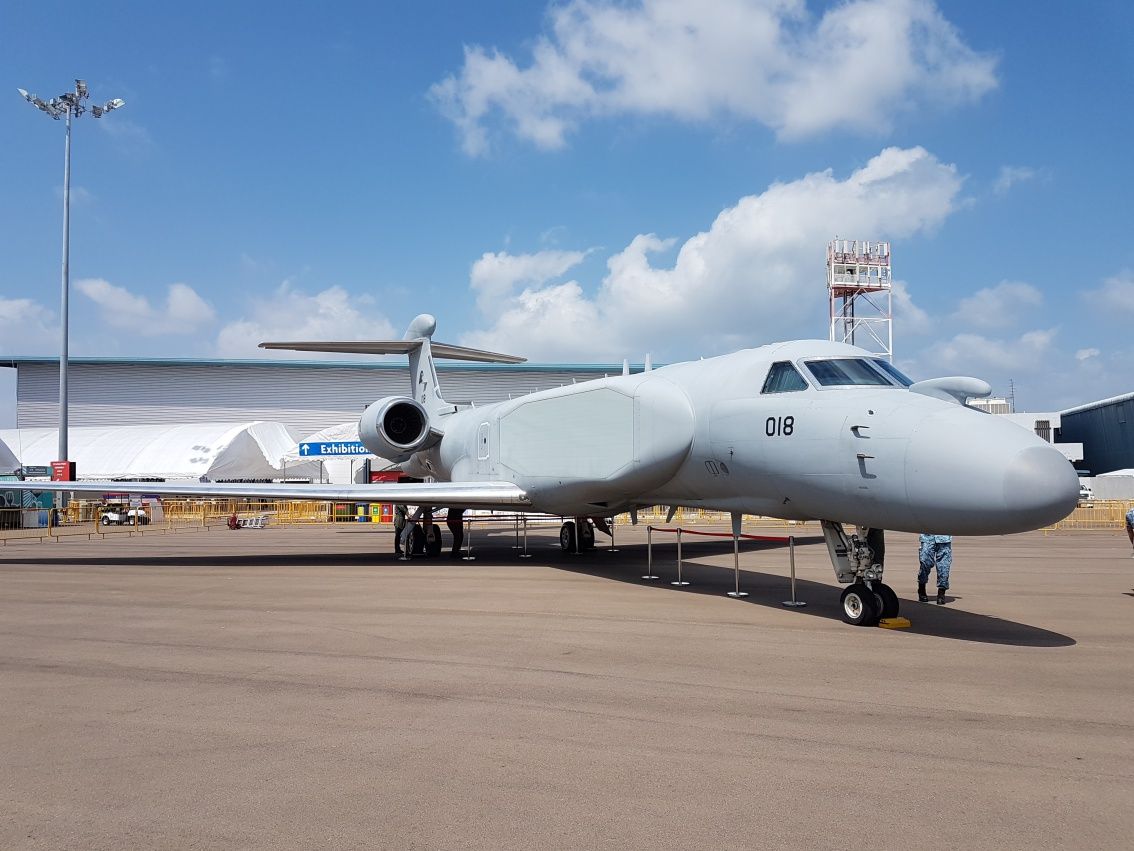