The primary role of these Royal Fleet Auxiliary (RFA) ships will be to provide munitions, food, stores and provisions to support carrier and amphibious-based task groups at sea. The competition is an example of the commitment to revitalising British shipbuilding embodied in the recent Defence Command Paper, according to Defence Secretary, Ben Wallace. “These vessels embody our commitment to a truly global presence, by supporting the Royal Navy’s operations around the world,” he stated, on announcing the competition.

Defence Equipment and Support (DE&S) has issued a contract notice, intended to challenge the shipbuilding industry and inviting companies to tender for design and build, incorporating next-generation technology. The successful bidder can work in partnership with international companies, but would be required to integrate the ships in a British shipyard. The contract will support – and be supported by – a refresh of the National Shipbuilding Strategy, to be published this summer, setting out the government’s commitment to UK shipbuilding and the associated supply chain.

DE&S’ Director-General Ships, Vice Adm Chris Gardner, commented that the contract will be “another step in implementing the National Shipbuilding Strategy and increasing our domestic maritime construction capacity and capability, alongside the Type 26 and Type 31 programmes already underway. The FSS ships will join the [QUEEN ELIZABETH-class] Task Group, carrying out replenishment at sea to supply stores and ammunition to sustain operations, which is essential to meeting the UK’s defence commitments. To do this, the ships will be able to transfer loads of more than two tonnes at a time while at high speed.” 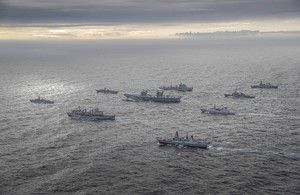