The unnamed system consists of a series of sensors and a central control system linked to launchers firing obscurants. It is designed to protect vehicles such as the TOS-2A multiple rocket launcher, PRP-5 reconnaissance vehicle (a variant of the BTR-80), and the ZAVET-D automated artillery control system.

According to Rostec, the system is capable of detecting and defending a vehicle from guided missiles with thermal, radar, laser and optical targeting systems. “Tests have shown that the system is capable of protecting equipment during combat and on the march against anti-tank missiles, as well as against aerial attacks by precision aviation weapons,” Bekhan Ozdoyev, Industrial Director of the Armaments, Ammunition and Special Chemicals cluster within Rostec, stated.

The obscurant, once launched, causes the missile to lose contact with the target, and to continue flying using inertial navigation and without precise targeting, the company claims.

The development reflects a common Russian concern regarding the prevalence of precision-guided munitions in NATO combat concepts. Its importance is reflected in 20 September Rostec announcement that the Russian armed forces had adopted the 3VD35 76mm obscurant grenade, also from Tochmash. The company states that it offers protection in the upper hemisphere from weapons such as the FGM-148 JAVELIN ATGM.

The defence against what the Russian military terms a ‘massed missile-aviation strike (MRAU),’ is a form of active defence, including networked air defence systems, company-level smoke generators, camouflage, concealment and deception, and vehicle-based solutions, such as those detailed by Rostec. The overall intention is to limit damage caused to Russian forces in the opening phases of a conflict with NATO, which it is presumed will include extensive use of MRAU. 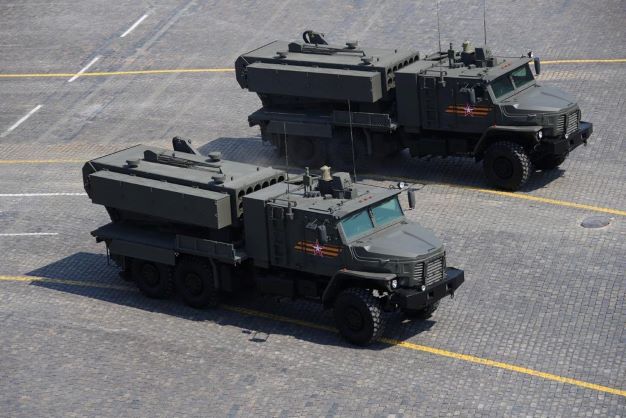 Rostec has launched mass production of a new passive APS designed to shield vehicles, such as the TOS-2A, against precision-guided munitions. (Photo: Rostec)