Boeing has selected Rohde & Schwarz MR6000R multiband-capable airborne transceivers from the SOVERON family of software-defined radios (SDR) to equip the T-7A RED HAWK, the Boeing/Saab aircraft being built to replace the US Air Force’s pilot training fleet, the companies announced on 19 May.

A total of 351 aircraft, 46 ground-based simulators and associated equipment are to be delivered under the $9.2 billion (€7.6 billion) contract. Fuselage sections for the first aircraft were digitally spliced in St Louis earlier this month, with the aft section having been manufactured by Saab in Sweden. The advanced training aircraft are destined to replace the USAF’s 57-year-old fleet of T-38C TALONs.

The MR6000R meets demanding size, weight and power consumption (SWaP) requirements, weighing in at under 4kg and covering a 30-400MHz frequency range. It also supports NATO HAVE QUICK II frequency algorithms for interoperability, as well, as the digital SATURN fast frequency-hopping standard.

“Along with updated technology and performance capabilities, the T-7A will be fitted with an enhanced radio communications suite, giving it an added benefit, preparing pilots for fifth-generation aircraft”, explained Michael Hostetter, VP, Boeing Defense & Space Germany.

Frank Dunn, President and CEO, Rohde & Schwarz USA (and Canada), Inc., added “The airborne transceivers from the SOVERON radio family provide excellent RF characteristics suitable for applications in harsh military environments for all types of airborne platforms. As this is a software-defined radio, we can adapt it for further training opportunities.” 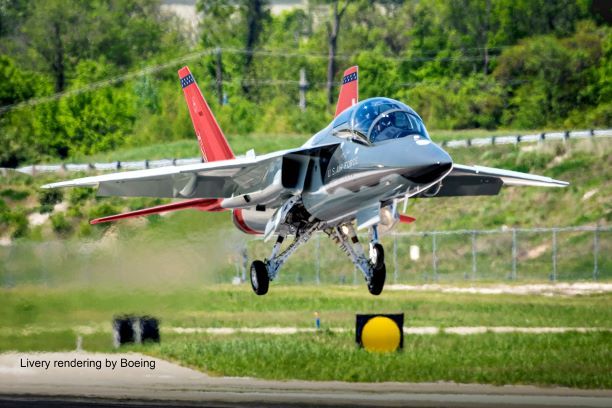