Rohde & Schwarz, ESG Elektroniksystem-und Logistik-GmbH, and the Bundeswehr have successfully conducted tests that demonstrate an ability to maintain voice and data transmissions to and from helicopters, despite interference from rotor blades.

The tests took place at the Bundeswehr Technical Centre for Aircraft and Aeronautical Equipment (WTD 61) in Manching. The platforms used were two piloted helicopters currently in use with the German military – the CH53 and the TIGER – as well as a rotary-wing UAV, ESG’s UMAT R-350. The aircraft were tested while static.

Interference can be caused to radio waves by the modulations caused by rotor blades. The companies demonstrated the robustness of datalinks against level drops, phase shifts and diffraction at the edges of the blades, while digital voice and data transmission was possible at the highest sensitivity. A comprehensive data set was collected, which will be used to develop SHF waveforms for broadband data transmission.

“Equipping today’s armed forces with secure, up-to-date solutions for radio networking is essential for command and control effectiveness during deployment,” Mathias Pauli, VP for Secure Communications at Rohde & Schwarz, stated. “These tests, on behalf of the German armed forces, investigated the influence of rotors from different types of helicopters on radio links. We achieved the goal of proving the suitability of the existing VHF/UHF and 5 GHz radio systems for operational deployment.” 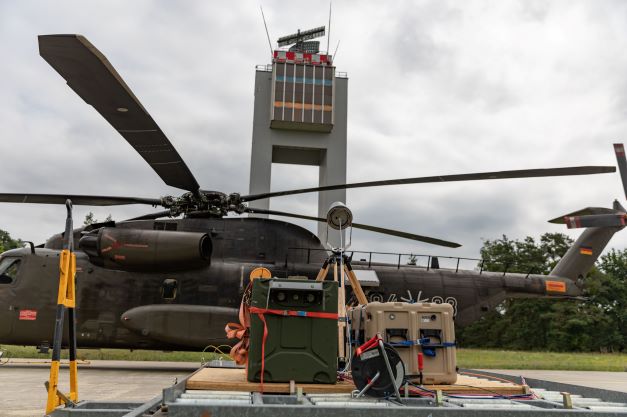