All three fixed wing training aircraft which will be inducted into the RAF training syllabus over the next year were present at the Royal International Air Tattoo (RIAT), held at RAF Fairford on 15-16 July. The RAF has outsourced its future training needs through the Military Flying Training System which in launched in 2008. Ascent Flight Training has worked closely with the UK MOD to run the flying training programme. in an 18-year partnership, Affinity Flying Training Services will manage the service with 23 Grob G120TP PREFECT basic trainers, ten Embraer PHENOM multi-engine trainers and ten Textron T-6 TEXAN II basic trainers.

The Managing Director of Affinity, Ian Chalmers told MONS at RIAT that 11 Grob 115 have been delivered to RAF Barkston Heath, while one is flying down at the Grob factory in Germany: “On type instructors are training on the aircraft in Germany, with most of them converting from the older G-115 Tutor. The G120TP has a better performance, a digital cockpit with good visibility from the cockpit. It is easy to fly so allows the students to focus on discipline-ship, information management and decision making – preparing students for frontline operational flying. This aircraft is designed to start these people on their journey.”

All 23 will be delivered by the end of March next year, only two years after the company, a joint venture between Elbit Systems and KBR went on contract in March 2015. Chalmers continued: “This is the benefit of a commercial off the shelf aircraft rather than designing one for the job.”

No 3 Flying Training School based at RAF Cranwell and Barkston Heath will fly them, although the instructor students will start flying them in August from RAF Barkston Heath. Training will later be split with RAF Cranwell. “Instructors will be going through a ‘test and adjust’ programme checking out the conversion course and the training syllabus. The first student pilots will commence their flying early next year, although they will start ground school before then,” he said.

The aircraft have been delivered with civil marks, but with the ‘release to service’ certificate being issued on the evening of July 11 just a few days before RIAT, the aircraft will soon appear in military markings. “Ready for Training Use [RFTU] will be July 31, which signifies the aircraft and the organisation is ready. By the end of the year the initial course capability (ICC) – when the simulators are ready, ground school is ready and the instructors trained – will mean the students can start flying training in January,” Chalmers explained.

The Embraer PHENOM 100 on display left the Embraer factory in Brazil on 4 July and arrived at RAF Cranwell on 10 July. According to Chalmers, the PHENOM should be RFTU in December if the release to service is achieved. At RIAT the aircraft was carrying a Brazilian civil registration but Chalmers said that after it returned to RAF Cranwell on Monday, it will be given a UK civil registration: “All five will be delivered by middle of next year, but I expect we will receive them early as I saw the second and third aircraft last week and they were almost ready.”

The PHENOM pilots have started their ground school at Brazil and will start flying next week.

The first T-6C for the RAF, at RIAT will head back to Texas after the show because it has not yet completed the mod programme. “It flew here for RIAT and is expected to return in January. We are modernising the buildings at RAF Valley, where they will be based, which will be ready for use by 4 FTS at the end of the year. We are recruiting our engineers and Ascent will be carrying out the T-6 pilot conversion. RFTU is not until the middle of next year so there is still a bit of time,” Chalmers said, who served for 22 years as a HAWK Qualified FIying Instructor (QFI) and his last tour was OC of the TORADO OCU, XV(R) Sqn at RAF Lossiemouth. “So I was part of the flying training pipeline and saw the output from it too. It is great to be back and see that pipeline made better.”

According to Air Marshal Sean Reynolds, the RAF’s Deputy Commander Capability and Air Member for Personnel and Capability, at RIAT: “Improving the way in which the RAF trains its pilots will see them going through flying training faster. This should the time it takes to become a fast jet pilot cut from the current five years down to three and a half. We are doing some analysis on the moment, on the PROTECTOR what we do we need for training RPAS flying training they get currently 60 hours a full elementary training package on Tutor but we think it should be 25-30 hours live. On PROTECTOR, General Automatics believe that the RPAS will do its own automatic taking off and landing. So our whole training remit is changing.”

The RAF is facing a bigger multi-engine pilot training uplift because of the introduction of the P-8A POSEIDON, A400M ATLAS and two additional SHADOWs. It already trains C-17, C-130J, SENTINEL and SENTRY aircrews. According to Air Marshal Reynolds, a former CHINNOK pilot, there will be an Air Force board discussion about it any additional requirements if any: “At the moment the thinking is we could order an additional two Phenoms, but we might be able to [cope] by working the aircraft harder.”

He went on to say it might be possible to cut down some of the tactical training for pilots who might not need it for the aircraft they are going to fly.

When the SDSR 2015 announced two more TYPHOON squadrons would be stood up in 2019 which was never envisaged in 2010 when the T-6Cs were ordered, its become obvious more T-6Cs could be ordered. The Air Marshal confirmed that with more money available now it could be possible to acquire more T-6Cs. One unnamed source disclosed to MONS, that the number of T-6Cs could actually go up to between 22-25. 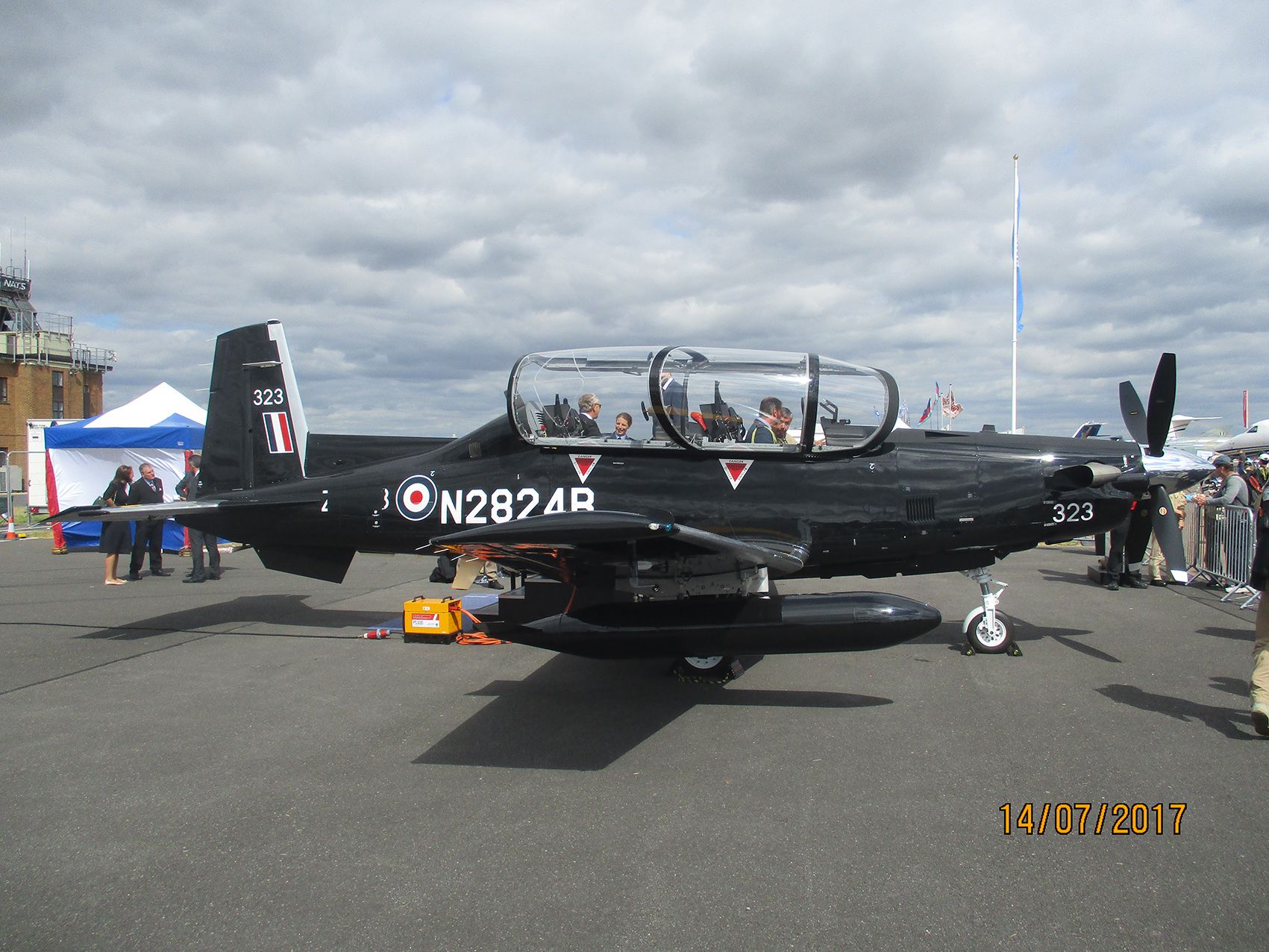