In June, the Royal Canadian Navy (RCN) commissioned HMCS HARRY DeWOLF, the first of eight Arctic and Offshore Patrol Ships (AOPS) and the second, the future HMCS MARGARET BROOKE, was delivered to the RCN by Irving Shipbuilding the following month. In both these milestones, the shipbuilder was strongly supported by GE Power Conversion, supplier and integrator of the power and electric propulsion systems for AOPS.

GE Power Conversion defined the entire power and propulsion system, from ‘fuel in’ to ‘thrust into the water.’ The company brought together skills from GE business units in the UK, France, the US, and Canada to integrate the complex system of equipment and software. To satisfy the RCN’s requirements for Polar Class 5 ice performance, using commercially available equipment, GE selected the MV7000 variable frequency drive, in combination with robust induction motor technology, as the heart of the propulsion system. With four diesel generators, high voltage switchboards and GE’s sophisticated power management and propulsion control technology, the entire system has met or exceeded all performance requirements, from Arctic ice to open water.

“Our AOPS build programme has hit its stride, with two ships delivered, a third to be launched this fall, the fourth in our construction hall and we have cut steel for the fifth ship.  As the programme expands to an eight-ship order, the largest multi-ship programme under Canada’s National Shipbuilding Strategy, we will continue to count on the strong leadership from within our own Irving team and from our key first-tier suppliers like GE Power Conversion. To be successful, shipbuilding, especially for multi-year, multi-ship programmes, really is a team activity, [in which] the shipyard and key suppliers work cooperatively to achieve their common goal for Canada,” stated Kevin Mooney, Irving President and CEO.

“Since contract award in 2012, GE’s entire AOPS team has focused on providing the most responsive support possible to [Irving] As the sole propulsion system integrator, with responsibilities to power the largest single ship class to be delivered under Canada’s National Shipbuilding Strategy so far, we are looking forward to earning similar responsibilities with Canada’s other shipyards, to help build the future fleets of the Royal Canadian Navy and Canada’s Coast Guard,” observed Gagan Sood, CEO, GE Power Conversion Americas. 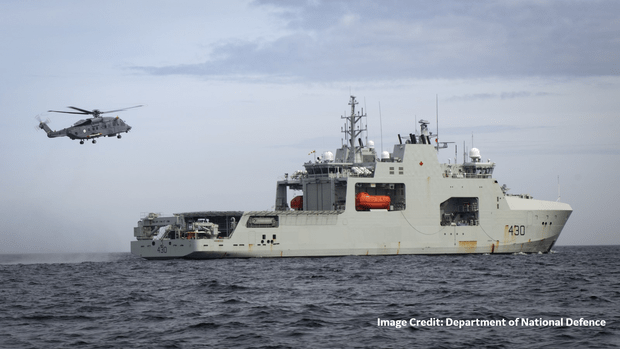 The AOPS will eventually form a class of eight vessels. (Image: Department of National Defence, Canada)