The US Navy has awarded Raytheon Intelligence & Space a contract, valued at $171.6 million (€145 million), for low-rate initial production of the service’s Next-Generation Jammer – Mid-Band (NGJ-MB).

“With its power and ability to jam multiple radars simultaneously, NGJ-MB will fundamentally change the way the Navy conducts airborne electronic attack,” commented Annabel Flores, the company’s VP of Electronic Warfare Systems. “NGJ-MB will increase the survivability and lethality of fourth-and fifth-generation fighters, making naval aviation that much more effective.”

The award follows the recent Milestone C decision, advancing the programme to the production and deployment phase. NGJ-MB has completed more than 145 hours of developmental flight-testing, using mission and aeromechanical systems. The programme has also completed over 3,100 hours of anechoic chamber and lab testing: chamber tests evaluated system performance both on and off the EA-18G GROWLER aircraft, in addition to jamming techniques and reliability testing. 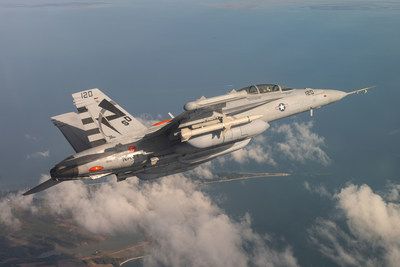 The new system will bring seminal change to the manner in which the US Navy prosecutes electronic attack. (Photo: Raytheon)