In the missile sector, Raytheon’s Standart Missile 3 (SM-3) is designed to defeat short- to intermediate-range, unitary and separating, midcourse-phase, ballistic missile threats. Deliveries are increasing for the SM-3 Block IB, with 160 “IBs” provided to the customer as of this 7 June.

Amy Cohen, Raytheon SM-3 Senior Program Director, differentiated the two variants, noting the next-generation SM-3 Block IIA interceptor is being developed and produced in cooperation with Japanese industry and will be deployable on land as well as at sea. “It has two distinct new features: larger rocket motors that will allow it to defend broader areas from ballistic missile threats and a larger kinetic warhead,” she said. “The interceptor’s kinetic warhead has been enhanced, improving the search, discrimination, acquisition and tracking functions, to address advanced and emerging threats.”

Mitsubishi Heavy Industries is the Japanese industry partner for the SM-3 IIA. Further, SM-3 IIA will be an integral part of EPAA Phase 3 in Poland, when the Poland land-based site is complete.

Ms. Cohen responded to how her office’s will further enhance the ballistic missile defence (BMD) capabilities of both SM-3 Blocks IB and IIA through early 2019, by concluding: “We are always looking to increase the capability of our missiles. The threat continues to advance, and we’re always working to stay ahead of the threat. We work to not only push the missile and define its full capability, but to also continue spiraling that capability.”

The SM-6 is not for BMD only. Indeed, Mike Campisi, Raytheon’s SM-6 Senior Program Director, noted the SM-6, “is the only missile that supports anti-air warfare, anti-surface warfare and sea-based terminal BMD in one solution—and it’s enabling the US and its allies to cost-effectively increase the offensive might of surface forces.”

First issued to the USN in 2013, the missile has become a paragon of missile defence evolution. Originally designed to defend ships against enemy aircraft, UAVs and cruise missiles, the SM-6 has redefined itself again and again by adding new capabilities. As significant, “by 2015 the missile had successfully added and proven the ability to protect ships against ballistic missile threats in their final phase of flight,” he recalled.

A handful of months later, it demonstrated the ability to take out objects on the ocean’s surface. SM-6 has also beat its own record many times over for the longest range surface-to-air intercept of its kind. “Also rather impressive – these new missions are added to the missile through software upgrades only; there is no physical change to the missile. The latest variant is the SM-6 Block IA missile, which is an emerging change to the Block 1 variant, with improvements to the guidance section. These enhancements allow the missile to seek out and destroy a wide variety of advanced threats with precision,” Mr Campisi said.

Raytheon has delivered approximately 450 SM-6 missiles to the USN.

The Pentagon approved the release of SM-6 to several international customers in early 2017. Many of the approved countries are seeking the missile to bolster their shipbuilding programs. “International navies are seeking the level of sophisticated protection that SM-6 provides. The flexibility of the multi-mission missile drives significant savings for our partners and allies; it’s the exact opposite of a boutique missile,” he observed.

With respect to the SM-6 programme roadmap through early 2019, Mr. Campisi concluded: “As reflected in the continued advancement and development of SM-6 to date, Raytheon continues to focus efforts on rapidly spiral capability into the hands of our warfighters. That means continuing to expand the capabilities of our missiles.”

Real and perceived geopolitical threats in Asia and the Middle East are certain to drive nations in and around the regions into the market place, to add initial or more BMD units to their orders of battle. At the same time, enhanced missiles, UAVs and other technology enhancements throughout the entire domain will provide service staffs and units with more lethal capabilities to deter, and when necessary, engage hostile missiles. 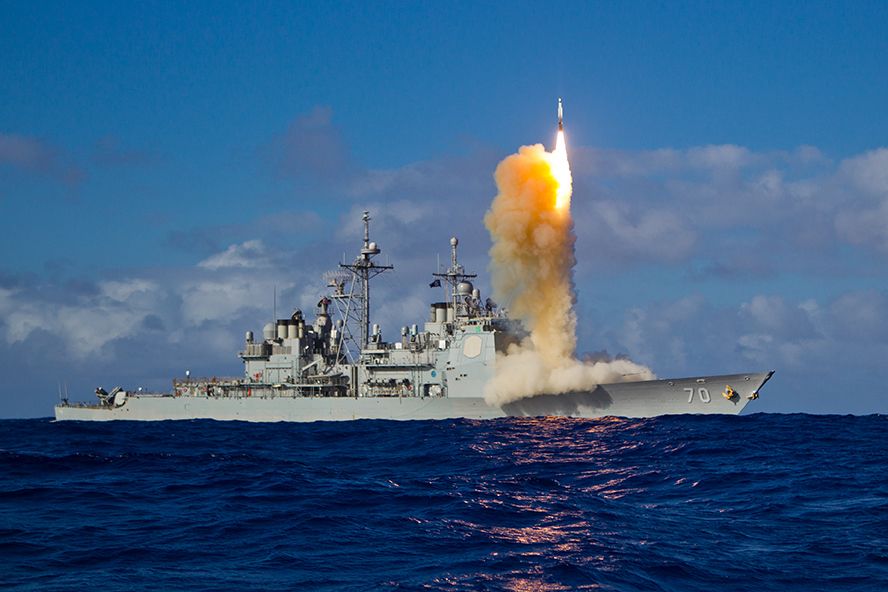