The Royal Australian Navy (RAN) has inducted into service its second and final SUPPLY-class AOR vessel, ship ordered from Spanish shipbuilder Navantia. Having been launched in Spain in August 2019, HMAS STALWART entered service in a 13 November ceremony at Fleet Base West, its homeport, near Perth.

STALWART and first-of-class HMAS SUPPLY, which entered service on 10 April 2020 at Fleet Base East in Sydney, are based on the Spanish Navy’s CANTABRIA-class AORs. The new 19,500t vessels were ordered in 2016 at A$642 million (€413 million) under the Project Sea 1654 Phase 3 Maritime Operational Support Capability programme, designed to both modernise and expand the RAN’s replenishment-at-sea capabilities.

SUPPLY replaced oiler-replenishment ship HMAS SUCCESS – which was decommissioned on 29 June 2019 after 33 years of service – while STALWART will replace HMAS SIRIUS, expected to be retired on 18 December.

According to the RAN, the SUPPLY-class ships are intended to carry fuel, dry cargo, water, food, ammunition, equipment, and spare parts to provide operational support for deployed naval or combat forces operating at sea for longer periods. More specifically, the service has stated that the double-hulled vessels, each of which can embark up to two MH-60R or MRH90 helicopters, can carry 1,450m³ of JP5 jet fuel, 8,200m³ of marine diesel fuel, 1,400m³ of fresh water, 270t of ammunition, and 470t of provisions.

Each has a beam of 23m, a draught of 8m, and they are stated to have a top speed of 20kt, with a range of 11,000km at 13 knots. They can accommodate up to 122 personnel, including crew, and feature Saab Australia’s 9LV combat management system.

In addition to replenishment, the new vessels can be used to combat environmental pollution at sea, provide logistics support for the armed forces, and support humanitarian assistance and disaster relief (HADR) operations, according to the RAN.

Speaking about the commissioning of HMAS STALWART, Australian Defence Minister Peter Dutton stated that the SUPPLY-class AORs will help “enable extended deployments” of Australian Defence Force (ADF) personnel. “The new replenishment ships will strengthen operational support to Navy combat units at sea and increase the ADF’s ability to support operations in the [Indo-Pacific] region [and are equipped with] a combat management system that improves information-sharing with other ADF and allied assets, allowing them to integrate more fully in a task group in support of missions”. 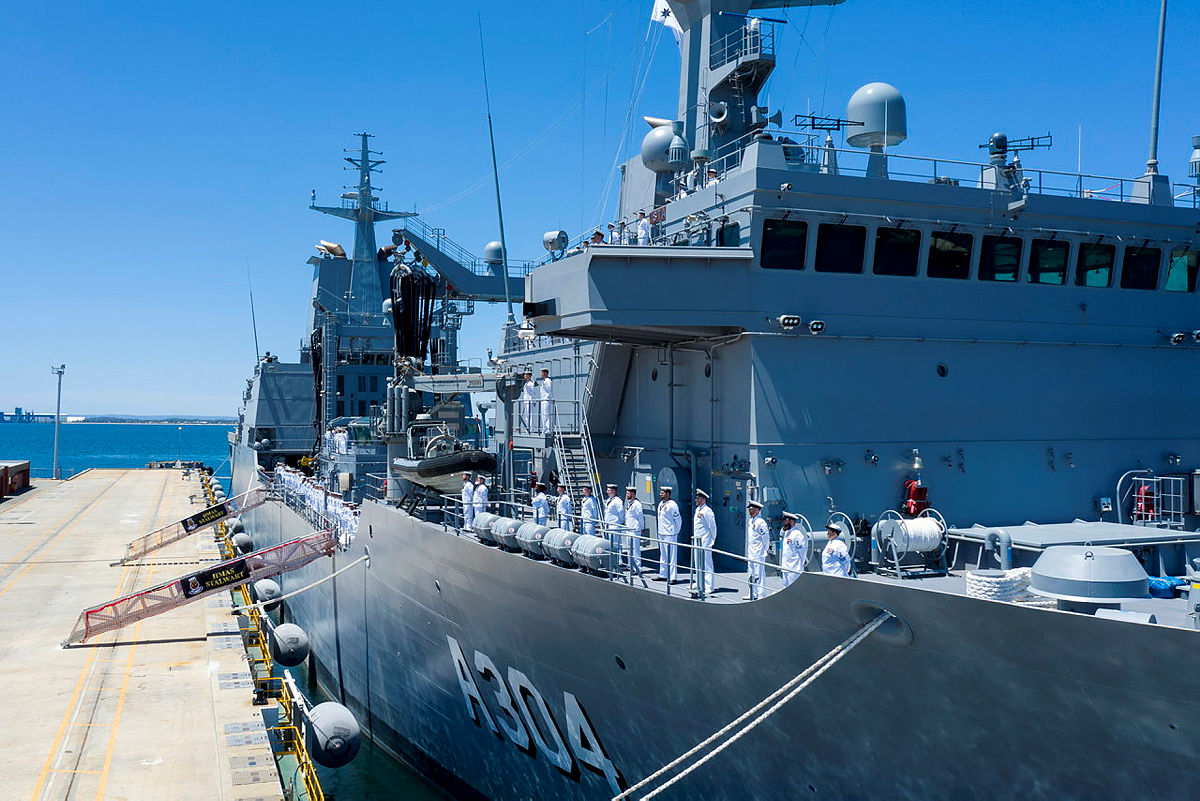 The crew of HMAS STALWART line the ship's upper decks during its commissioning ceremony at Fleet Base West, Rockingham. (Photo: RAN/LSIS Richard Cordell)