Rafael is in negotiations with a number of defence companies to accelerate finding a launch customer for the SEABREAKER missile. Such a contract will enable the company to fully develop the missile.

MON understands a number of US companies are in discussions, so that the missile can be offered for US Navy applications, although Rafael declined to comment. Manufacturing SEABREAKER in the US will also enable the Israeli navy to acquire it, using Foreign Military Financing (FMF) funds provided by the US. The extent to which US dollars can be converted to Israeli currency is gradually decreasing, in line with the current FMF agreement.

Rafael contends that SEABREAKER is based on some very advanced technologies, already incorporated into other operational and combat-proven weapon systems. Israeli defence sources further suggest that, in almost all aspects, SEABREAKER is superior to any comparable USN weapon. One such source, though reluctant to elaborate, stated that the use of AI, in combination with other technologies, “makes the difference,” empowering outstanding performance against a broad target set, “[both] stationary and evasive.”

Presumably, at least two American companies have been exposed to the new missile already: Raytheon – Rafael’s partner on the IRON DOME and DAVID’s SLING air defence systems, and Lockheed Martin – with whom the company collaborates on the SPICE gliding bomb family.

When SEABREAKER was unveiled. Yoav Har-Even , Rafael President & CEO, explained that mature technologies were used in development of the missile, which brought the unit price down. For now, the missile is for sea and land applications, but one Israeli expert told MON he will not be surprised to see an air-launched variant developed.

Rafael states SEABREAKER provides surgical, pinpoint precision strikes from stand-off ranges of up to 300km, and features an advanced IIR [Imaging Infra-Red] seeker. It is ideal, the company suggests, for engagement of maritime and land targets, stationary or moving. Its size means it can be launched from a variety of platforms, from FAC(M) to corvettes and frigates. The land version is offered as a component of coastal defence solutions, based on Rafael’s highly mobile SPYDER air defence launchers. Battery architecture supports standalone lor integrated system use, with C2 and sensor fits at the customer’s discretion.

The system boasts operational functionality in GNSS-denied arenas, under all weather conditions, and is jam-resistant and ECM immune, according to Rafael. Flying at high subsonic speeds, SEABREAKER has a multi-directional, synchronised full-sphere attack capability, based on predefined attack plans, according to waypoints, azimuth, impact angle and aim point selection, ensuring a high probability of mission success. The company says that, with a 250lb penetration, blast and fragmentation warhead, a single hit is effective enough to neutralise a frigate-sized ship.
The missile’s datalink supports real-time man-in-the-loop decision-making and tactical updates. It also features a mid-flight abort capability and Battle Damage Assessment (BDA). 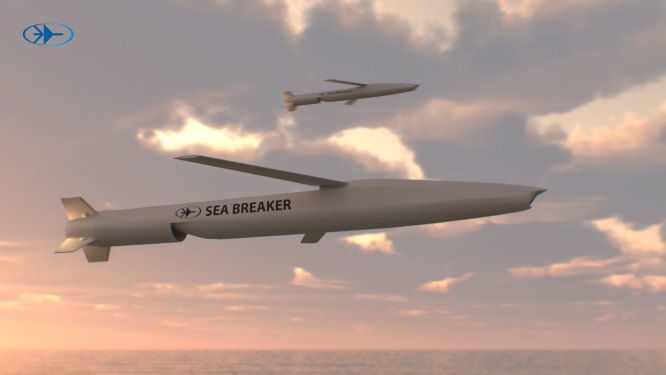 SEABREAKER could in future add an air-launch capability. (Photo via author)