Britain’s Royal Air Force and Zero Petroleum have successfully conducted a flight powered solely by synthetic fuel, and the Guinness Book of World Records says it is a world first.

An Ikarus C42 microlight, flown by Gp Capt Peter Hackett, completed “a short flight” from Cotswold Airport on 2 November, according to a media statement. After extensive ground testing in the aircraft’s Rotax 912UL engine, the flight was powered by Zero Petroleum’s UL91, manufactured by extracting hydrogen from water and carbon from atmospheric CO2, then combining them using energy derived from renewable sources.

The fuel “ran successfully in the aircraft as a whole blend without any modification whatsoever to the aircraft or the engine,” explained Zero’s CEO, Paddy Lowe. “Rotax’s measurements and the test pilot’s observations showed no difference in power or general performance compared to standard fossil fuel.” During ground tests, the only noticeable difference was a lower operating temperature. This suggests that use of synthetic fuel could increase engine lifespan, as well as reducing carbon emissions.

The flight forms part of the RAF’s Project MARTIN, an ambitious programme initiated by the force’s Rapid Capabilities Office. Under the project’s auspices, a bespoke synthetic fuel-manufacturing plant was designed and built in the Orkney Islands, demonstrated in September/October, then fuel for the flight was manufactured. The renewable hydrogen used was locally extracted using wind, tide and wave energy. The entire process, including designing the fuel itself, has taken less than five months: Project MARTIN did not begin until June.

“As part of our commitment to sustainability we are exploring a range of low-impact energy options tailored to the breadth of our aircraft fleets,” said MARTIN project leader, Wg Cdr Nicola Sinclair. “Alongside electric, hydrogen and fuel cell technologies, we are partnering with innovative British ventures to develop and advance a range of high-quality future fuel technologies with low or no logistical footprint or reliance off-island.”

As part of its contribution towards the UK government’s target of becoming a net-zero carbon emissions nation by 2050, the RAF is planning for its first net zero airbase by 2025, and to become a net zero force by 2040. “Climate change is a transnational challenge which threatens global resilience and our shared security and prosperity,” said the Chief of the Air Staff, Air Chief Marshal Sir Mike Wigston. “I am determined to tackle this head on and have set the Royal Air Force the ambitious goal to be Net Zero by 2040. The way we power our aircraft will be a big part of achieving that goal, and this exciting project to make aviation fuel from air and water shows how it might be done.” 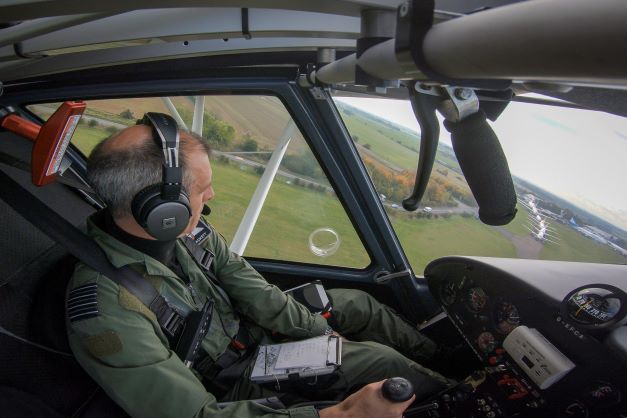