The VOYAGER fleet already supports British defence activities around the world, and the Qatar AAR service over the next two years will be part of this. The deployments will be planned to co-ordinate with the UK’s operational and training needs and will benefit the RAF by enhancing interoperability with international personnel and equipment.

“An important step in the ever-growing military partnership that joins QEAF and RAF, the joint HAWK training squadron is an integral component in increasing interoperability and coordination between both air forces, leading to closer cooperation and alignment in future military and peacekeeping efforts,” stated Minister All Attiyah.

The formation of a second UK-Qatar joint squadron, which was initially announced last year, will provide additional flying hours for RAF pilots and see long-term international investment in new infrastructure and training facilities at RAF Leeming. This will include a HAWK training simulator, and the refurbishment of existing facilities.

The strengthened defence partnership will boost Qatar’s ability to tackle shared security challenges in the Middle East, contributing to regional stability and protecting the prosperity and security of the UK at home. The Qatari government’s procurement commitment, which included 24 TYPHOONs, nine HAWK T2s and a bespoke support and training package, totalled some £6 billion (€7.05 billion). 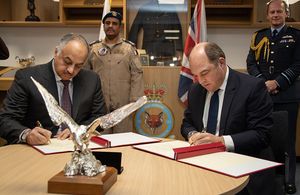