Reaction to Perceived Escalation from NATO

In a 1 November meeting with the leadership of the Russian MoD and defence industry, President Vladimir Putin announced an ambitious procurement plan for the Russian Aerospace Defence Forces (VKS) in response to increased military activity from NATO in Europe.

This marks a significant increase in the quantity of systems available to the VKS, which have received just 25 S-400 systems and 70 modern aircraft in the past four years, alongside 20 modernised S-300s and 90 modernised aircraft, according to Putin. Over 80% of VKS equipment will be regarded as modern by 2025-2027, demonstrating the importance assigned to this service by Russian doctrine.

Putin also highlighted the development of Russia’s centralised air and space defence control system to account for emerging threats, adding the defence industry has a role to play in achieving all of this, and that it should, “expedite the development rates of modern weapons for air and space defence, and quickly begin full-scale production using domestic hardware and components.”

The driver for this statement is the increase in NATO flights close to Russia’s borders, as well as the movement of NATO ships with guided missiles into the Black and Baltic Seas, the president said. He added that attempts to develop hypersonic missiles, as well as deployment of elements of the US Ballistic Missile Defence System to Europe were also impacting the drive to further improve and overhaul the VKS.

Putin’s language in the meeting is indicative of the prominence that aerospace defence plays within the Russian concept of escalation management. He indicated that military and industrial infrastructure is now better protected than before, highlighting the fear that NATO would engage ‘critical nodes’ in the hope of defeating Russia without the need for a conventional land engagement. In this context, the VKS is expected to parry the use of massed air and missile strikes, whilst causing attrition to NATO air assets and preventing an early defeat of the Russian forces. 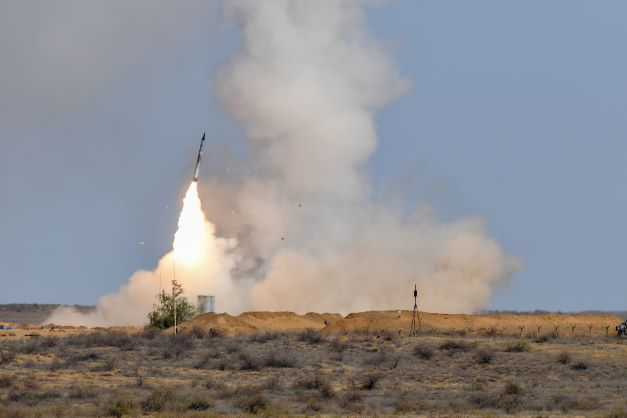 President Putin has announced that the VKS must be supplied with 200 additional aircraft and 26 strategic air defence systems in the next “few years” at a meeting of defence industry and MoD leaders. (Photo: Russian MoD)