State-owned land systems specialist PT Pindad (Persero) announced on 20 January it has handed over a total of 43 new wheeled armoured vehicles to the Indonesian military.

The Bandung-based company stated the MoD in Jakarta took delivery of seven Badak 6×6 direct fire vehicles, 26 Anoa 6×6 APCs (including the C2 variant), and 10 Komodo 4×4 light APCs, in a ceremony presided over by Defence Minister Prabowo Subianto.

The handover during a two-day leadership meeting at the MoD, aimed at consolidating development of Indonesia’s armed forces, with Prabowo quoted as saying that Jakarta is looking at ways to increase “synergy and co-ordination” between all defence elements. All three vehicle types are already in service with the Indonesian armed forces, so these are additional units.

According to PT Pindad, the 16.5t Badak fire support vehicle is armed with a 90mm gun and a 7.62mm co-axial machinegun. Operated by a crew of three, the platform has a top speed of 80km/h, a cruising range of 600km, and offers a STANAG 4569 Level 3 of ballistic protection.

The 13t Anoa APC can carry up to 12 troops, including the driver (the C2 version can only carry seven), and is equipped with an RCWS, modern communication systems, and automatic transmission, according to the manufacturer. The vehicle also has a top speed of 80km/h and a cruising range of 600 kilometres.

Referring to the Komodo light APC, PT Pindad said the 8.5t platform, which is equipped with an RCWS, an intercom system as well as VHF and HF radios, can carry up to 10 troops. The vehicle, which has a top speed of 80km/h and a cruising range of 450km, has been fitted with GPS navigation and thermal sights. 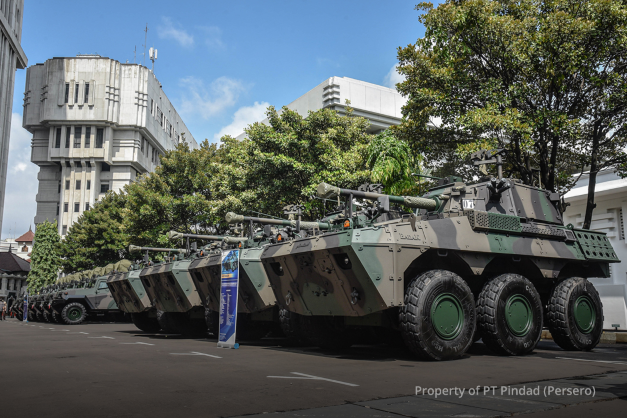