Czech-based fixed-wing UAV manufacturer Primoco and Swiss-Swedish unmanned rotorcraft developer UMS Skeldar have agreed to collaborate to provide a combined solution for what their combined statement refers to as “selected customers“. Some of those customers were present at Primoco’s company airport, in Pisek, for a joint capability demonstration of the firms’ ONE 150 and V-150 aircraft, on 15-16 November.

The collaboration makes sense for users as well as for the companies involved. Both aircraft share a common datalink system, simplifying operations and making control from a single ground station possible. Both aircraft sit inside the same segment of the European Aviation Safety Agency’s regulatory framework, and comply with the same sets of regulations, which should make the process of flying them together in civilian airspace at least no more complicated than to fly either platform on its own.

“[UMS Skeldar]’s approach towards unmanned aviation and its team spirit fully matches with ours,” said Ladislav Semetkovský, Primoco’s CEO. “Together we solve the dilemma of many current RPAS operators, who are still hesitating between the selection of fixed-wing or rotary-wing platforms. With our ONE 150 and Skeldar’s V-150 they do not have to; they can have benefits of both.”

“Providing both our vertical take-off and landing V-150 and Primoco’s ONE 150 as one solution gives organisations the versatility they need to complete their often complicated missions,” added UMS Skeldar’s CEO, Axel Cavalli-Bjorkman. “We believe this agreement will give customers exactly what they need for their UAV missions.” 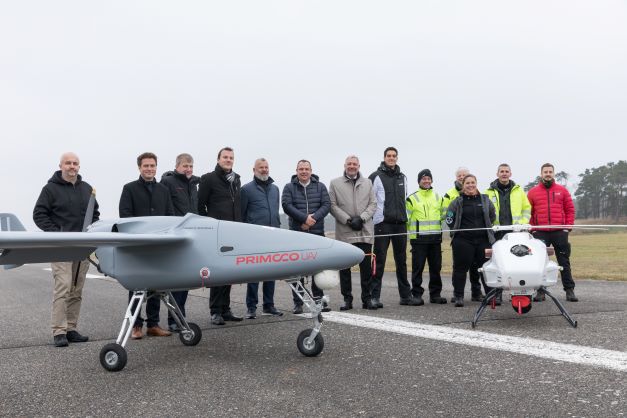 The combined teams, with their respective aircraft, during the mid-November flight demonstrations. (Photo: Primoco/UMS Skeldar)