Prepare for Operations in a Space Degraded or Denied Environment

US Space Command (USSPACE COM) provides – among many other things – position, navigation and timing (PNT) data, satcoms, ISR capabilities and missile warning to a host of combatant units, including precision fires. But leaders involved in fires should be prepared – and prepare their troops – to operate in the absence of those capabilities in circumstances in which the use of space may be degraded or completely denied, said USSPACECOM commander, Gen James H Dickinson, at the 2021 Fires Conference in Fort Sill, OK, on 1 September.

Dickinson said he was pleased to see artillerymen practicing use of the M2 aiming circle — a non-electronic, mechanical and optical device — to aim their guns. “They were setting in that weapon system … they weren’t using GPS,” he said. “They were doing something that they absolutely have to be able to do in the event that they don’t have that signal. And that might not be for a long time, but it might be at a critical point on the battlefield where you have to be, in order to provide your effect — whatever that is — and you can’t get to that.”

The general said he believes that at training centres, scenarios now involve degraded environments to force participants to fall back on older methods to accomplish their mission. “I think they are creating those effects at the National Training Center, at combat training centers, so that you get a feel for what that’s like and having to go back to like an M2 aiming circle or even a lensatic compass and a map, if you have to,” he said. “But I think you, we, have to be prepared that you will be in a degraded or denied environment. And, so, understanding what that means and how you can mitigate that will be even more important.” 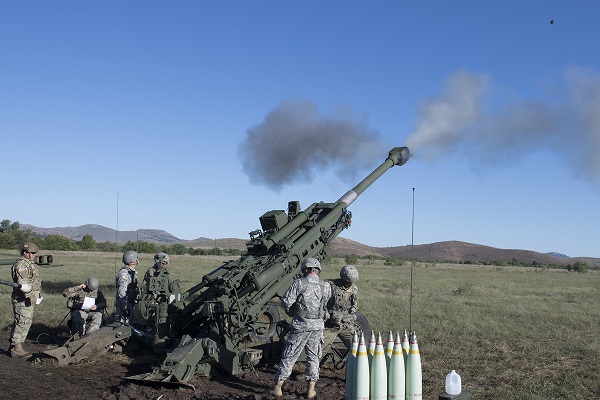 Artillery units everywhere are learning to use their weapons – like this US Army M777A2 howitzer – in environments in which facilities sometimes taken for granted – such as PNT and ISR capabilities – may be temporarily denied. (Photo: US Army/Maj Geoff Legler)