Computer technology evolves so rapidly that we hardly notice the change as the latest models and software arrive. We expect to see new car models unveiled annually and, occasionally, we even see new versions of armoured vehicles. But is there, actually, fundamental change?  Braking systems may be more efficient, suspensions may make the ride more comfortable, or engines may be more powerful and more environmentally friendly. The fundamental engineering, however, has not changed substantively since Henry Ford began building motor cars over a century ago.

Ford’s endeavours marked the start of a love affair between automotive manufacturers and oil producers, now into its 13th decade – a period in which the world’s population grew from less than two billion to approaching eight billion. A population that is more mobile, needs to be fed and housed and has an ever-increasing thirst for consumer goods. All of which drives massive global demand for energy.

Increasing levels of carbon dioxide globally are, however, forcing transformation. The impact of climate change on defence and security – with the potential of rising sea levels, extremes of weather, mass migration and civil unrest – mean that change is no longer a choice: it is a necessity.

That change is now decidedly underway. Much has been written about the ‘4th Industrial Revolution,’ involving the fusion of technologies and the blurring of lines between the physical, the digital, and the biological. In the automotive sector, this change is already mainstream and – make no mistake – it is coming to the defence vehicles sector. At Cytec IPS, the consequences influence our work daily.

Companies such as Tesla maintain a high profile in the civilian electric vehicle market, but they are far from alone in their focus on future technologies: General Motors invested $25 million in its battery development facility as long ago as 2009.  That now seems to be loose change, compared to the company’s recently-announced plan to invest $35 billion in electric vehicles by 2025. Other examples of huge investment can be found in areas such as autonomous operation and artificial intelligence.

Britain has already legislated for environmental change, resulting in commitments from the MoD to adopt an incremental approach to tackling important issues and meeting targets. From 2026-2035, the UK’s armed forces will aim to significantly reduce emissions using existing and emerging technologies. From 2036-2050, they plan to use novel technologies to reduce them further, with an ultimate target of zero carbon emissions. There is, however, clear recognition that current ‘green’ technologies have some way to go before they are mature enough for some defence applications.

UK MoD programmes to convert JACKAL and FOXHOUND to demonstrate innovative, hybrid technologies have been heavily publicised of late. These seem to be the first steps towards achieving environmental goals, while demonstrating that acceptable operational capability can be maintained.

For military vehicles, what are the critical issues?

Perhaps one of the most significant is logistics. How will new energy sources going to be delivered to the vehicle? How will batteries be charged? How is it all packaged?

Developments in hydrogen technology continue to be a source of debate, whether in relation to production methods or the use of hydrogen as an energy carrier. It is predicted that the international market for hydrogen will be worth $700 billion by 2050, with Saudi Arabia making investments to position itself as a global supply hub for ‘green’ hydrogen. High profile projects, such as the Neom Mega City, are important features of the ‘green’ plan under Saudi Vision 2030 and the nation’s efforts to diversify its economy and reduce dependence on oil.

Key technological pillars of the future defence vehicle will be electrification, autonomy, and cyber security. The latter is an area in which an enemy can potentially wreak havoc in new and innovative ways, with previously unimaginable consequences.

The challenge now, for the defence vehicle community, is to determine the equivalents of those automotive building blocks that served Henry Ford and his successors so well for so long. Understanding factors that will shape the future landscape is crucial – What are the key technologies? What are the political drivers? Who will invest? Who will adopt? Where can you find the skills and infrastructure to support a changed industry? 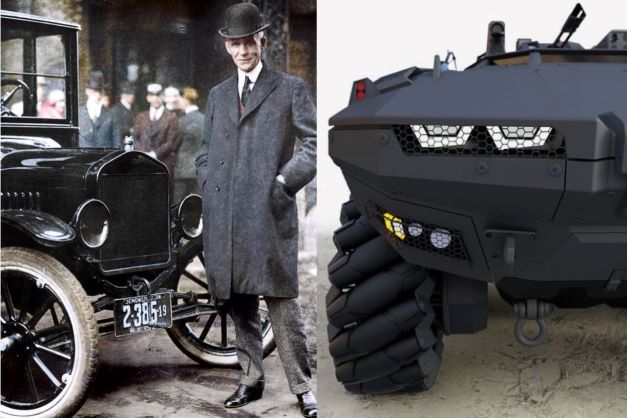 Not cause and effect, perhaps – but an indirect stimulus that continues to accelerate expectations, aspirations and developments. (Image via Cytec IPS)